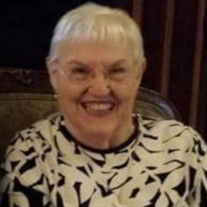 Junarita Rachel May Shinn, 85, formerly of the Hogshooter area east of Bartlesville, died on Sunday, July 5, 2020 at Willard, Missouri. Junarita was born in a small farmhouse in Centralia, OK June 13, 1935 to Alexander May and Madge Stockton May. She received her diploma in 1953 at Centralia High School and moved to Bartlesville, OK in 1954, where she began work at Phillips Petroleum as a file clerk. Soon after in that same year, she met Jack Wilson Shinn, her one and only love, at a local roller skating rink. They were married on March 04, 1955 by the Justice of the Peace in Bartlesville. They bought their first home in Dewey, OK and lived there until 1960, when the couple moved to the 26-acre property east of Bartlesville on Hogshooter Creek. It was known to them as Shinndell, a quiet little property of pasture and trees that became their peaceful home for 57 years. Junarita left her work at Phillips in 1959 to begin raising a family. Her daughter, Paula, was born on May 17, 1959 and four years later, her son, Kevin, was born on June 27, 1963. She and Jack raised their children on the farm at Shinndell until they left the nest and moved away to college. In 1967, Junarita went to work at the Bartlesville Post Office as a rural mail carrier. Many knew her as the MAILADY, the moniker imprinted on her specialized Oklahoma license plate. She retired in 1995 after 27 years of service. Known to many as Miss June or Mama Shinn, she is survived by daughter Paula Pence of Willard, MO and son Kevin Shinn, of Lincoln, NE. She had six surviving grandchildren, Sarah Walker and spouse (Dee) of Bella Vista, AR, Mark Pence and spouse (Laramie) of Kansas City, MO, John Pence of Tulsa, OK, Jackie Pence of Willard, MO, Luke Shinn and Claire Shinn, both of Lincoln, NE. Her only great granddaughter is Elise Pence, daughter of Mark and Laramie Pence. Her surviving sisters are Wilburta Cullison of Bartlesville, OK and Lula Ann Looney of Arkansas City, KS. She was preceded in death by Jack, her devoted husband of 50 years, her parents, brother A.R. May and sister, Freida Lee. Funeral services will be held at 2 P.M. on Wednesday, July 8, 2020 at the New Harmony Baptist Church with Pastor Lonnie Hoelscher officiating. Interment will be in the Oglesby Cemetery directed by the Stumpff Funeral Home & Crematory. Memorial donations in Mrs. Shinn’s name may be made to the New Harmony Baptist Church.

Junarita Rachel May Shinn, 85, formerly of the Hogshooter area east of Bartlesville, died on Sunday, July 5, 2020 at Willard, Missouri. Junarita was born in a small farmhouse in Centralia, OK June 13, 1935 to Alexander May and Madge Stockton... View Obituary & Service Information

The family of Junarita Rachel May Shinn created this Life Tributes page to make it easy to share your memories.

Send flowers to the Shinn family.