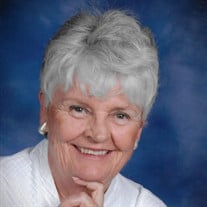 Julia (Judy) Lois Schultz Maddux died after several years with Alzheimer’s disease. She was born in Sparta, IL on July 28, 1938 to Martha Jane and John Vernon Schultz. Judy grew up in Lawrence Illinois graduating in 1956, moving to Tulsa in 1959 and marrying the love of her life Jack Maddux May 27, 1961 in the first Presbyterian church of Tulsa, the two lived in Bartlesville until 1964 where she was active in the Jaycee-ette and was named Jaycee-etts of the year. Following Bartlesville Phillips sent them to Kansas City, Stroud, Ok, Oklahoma City, and Weatherford, OK. She graduated from Southwestern Oklahoma with a degree in Psychology. After several moves, they finally settled down in the beautiful town of Bartlesville, Oklahoma in 1987. While in Bartlesville Judy was an active member of the PEO Chapter CH, along with Hillcrest county club, an avid golfer no matter where she was it was something she really enjoyed along with Traveling which the couple did quite often traveling to China, India, Botswana, Chile, Singapore, and Hawaii several times. Survived by her husband of 60 years Jack Maddux of Bartlesville, 3 children John Andrew of North Carolina, Christopher Brent of Bartlesville and Stacy Blackstone of Frisco Tx, 6 grandchildren and 3 great grandchildren, Jerry and Beth Maddux, Rick and Sue Maddux both of Bartlesville. Along with a very close friend Yumi Jodai of Singapore. In Lieu of flowers, the family asks that donations be made to the Washington County SPCA, 16620 State Hwy 123, Bartlesville, OK 74006 or the Animal Rescue Foundation, P.O. Box 3292, Bartlesville, OK. No services are being planned. Cremation will be carried out by Stumpff Funeral Home.

The family of Julia "Judy" Lois Maddux created this Life Tributes page to make it easy to share your memories.

Send flowers to the Maddux family.