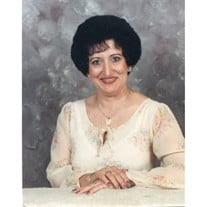 Funeral services for Judy Marie Sisk, long time resident of Sperry, were held Monday April 23, 2018 at 2:00 p.m. at the First Baptist Church in Sperry, Oklahoma, with Pastor Andy Anquoe officiating.        Interment in Osage Garden Cemetery in Skiatook, OK, was under the direction of Peters-Stumpff Funeral Home.  Casket bearers for the service were John Hendrix, Kenneth Halford, James Calvin "J.C." Sisk Jr., Clesson Hogue, James Hogue and Cecil Hester. Honorary casket bearers were Chris Stanton and Curtis Stanley. Musical selections for the service were "Into The Shadows", "The Old Rugged Cross" and "God On The Mountain".       Judy passed away on April 18, 2018, at The Journey Home in Bartlesville.   She was born on November 25, 1944, in Pawhuska, OK to Elbert "Arkie" and Florence Mae (Whitley) Hogue.  Judy married Donald D. Halford in 1963, he preceded her in death on May 5, 1990.  She married James "Jim" Calvin Sisk Sr. on January 9, 1978; he preceded her in death on June 20, 2007.  Judy work as a certified nurses aid at the Barnsdall Nursing Home and St. Simeon's Assisted Living Center.  She also worked as a seamstress at Munsingwear.  Judy had made her home in Sperry for 39 years where she was a member of the First Baptist Church.       Judy is survived by her three children: Tammy Hendrix and husband John of Bartlesville; Kenneth Halford and wife Tanya of Barnsdall; James Calvin "J.C." Sisk Jr. of Skiatook; 13 grandchildren and, 8 great grandchildren and a brother Kenneth Wayne Hogue of Barnsdall.       She was preceded in death by her parents, two husbands, a sister Martha Lee Schmidt, two brothers: Elbert Arthur "Sam" Hogue and Donald Eugene Hogue.

The family of Judy Marie Sisk created this Life Tributes page to make it easy to share your memories.

Send flowers to the Sisk family.