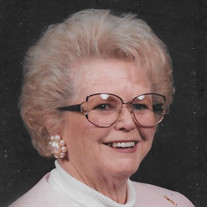 Juanita Joan (Sweetland) Sumpter, 90, of Bartlesville, passed away peacefully on Saturday, June 20, 2020 at the Bartlesville Health and Rehab. She was born May 3, 1930 in Valley Center, Ks. to Zephyr and Phoebe Sweetland. Juanita was raised on her family farm, in Towanda, Ks. She also received her education there in Towanda. Juanita married Clarence Sumpter, on July 3, 1948 where they made their home in Bartlesville. They were blessed with two daughters Barbara Ann and LaDonna. Then being transferred with Phillips Petroleum to Egypt for two years. They then went London for four years before returning to Bartlesville for two years. They then returned back to London for fifteen years. Back home to Bartlesville they then started their home in Oglesby, Ok where they started ranching for several years. Juanita was very active in the Oklahoma women’s cattle association. She also was Chairman Bartlesville Symphony, and a member of the Bartlesville Garden Club and a member of First Bartlesville Church. She is survived by two grandchildren Stephanie Burk and Stephen Walker of Bartlesville; two great-grandchildren Brittany and Justin Burk and five Great-Great Grandchildren Olivia Ayne Reid, Kennedy Edith Reid, Arielle Reid, Amelia Blair Burke, James Lee Blake Burke. All of Bartlesville. Also survived by several nieces and nephews. She was preceded in death by her husband Clarence Sumpter, and by two daughters, Barbara Ann Terry and LaDonna Walker, her parents Zephyr and Phoebe Sweetland, three brothers John Sweetland, Martin (Tiny) Sweetland and Lang (Frosty) Sweetland, two sisters Martha Wheeler and Melba (Red) Shinn. Memorial services will be held at 2 PM on Thursday July 9, 2020 in the chapel of Stumpff Funeral Home and Crematory.

Juanita Joan (Sweetland) Sumpter, 90, of Bartlesville, passed away peacefully on Saturday, June 20, 2020 at the Bartlesville Health and Rehab. She was born May 3, 1930 in Valley Center, Ks. to Zephyr and Phoebe Sweetland. Juanita was raised... View Obituary & Service Information

The family of Juanita Joan Sumpter created this Life Tributes page to make it easy to share your memories.

Send flowers to the Sumpter family.