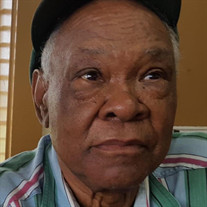 On Oct 1, 1936 in Strang, Ok a loud cry was heard in the home of Sam and Judy Parks. It was the arrival of their 7th child, Josh Lee. Josh attended and received his education at Lynch’s Prairie School in Strang, OK. While growing up, he hastily acquired and pursued a deep interest in auto and tractor mechanics, agricultural groundwork such as brush hogging, tilling and plowing. He derived great pleasure from this work for many years. He became well known for his signature outfit of overalls with only one strap buckled and wearing a random trucker hat. He was very well known and deeply loved in the communities of Nowata and Vinita. Many thought he was gruff, but his bark was much worse than his bite as evidenced by his willing to lend a helping hand to anyone in need. Josh had several jobs over his lifetime. As a young man he worked at a dairy, Randall Norton (Goodyear) Tire shop in Vinita and ultimately retired from the Oklahoma Dept of Transportation. Josh was truly a jack of all trades. On March 13, 1968 he married the love of his life, his one and only true love, Virginia Wilks. They then made their home in Nowata, OK. To this union came two beautiful children, Warren and Nyree. They were the apples of his eyes. Josh was a dedicated hardworking husband and father. On Dec 11, 2020 Josh peacefully went to sleep in death. He believed in Jehovah God and his son Jesus Christ. Those of us who know and love him look forward to seeing him again when he is called out. Josh had a special love and close relationship with cousin Billie Ruth whom he called his running buddy, his beloved older brother Sam, his baby sister Rose, his dearest cousin Arlene and his adored niece Janice. He is preceded in death by his parents and six siblings. Left to cherish his memory and celebrate his life are his wife Virginia of the home, son Warren Wilks (Mona) of Collinsville, OK, daughter Nyree Parks of Dallas, TX, 5 grandchildren, 6 great-grandchildren, sister Rose Parks of Lebanon, PA, brother Steve Parks of Tulsa, OK and host of nieces, nephews, cousins and friends. Due to the current Covid-19 pandemic, the family requests that anyone that attends, please wear a mask.

On Oct 1, 1936 in Strang, Ok a loud cry was heard in the home of Sam and Judy Parks. It was the arrival of their 7th child, Josh Lee. Josh attended and received his education at Lynch&#8217;s Prairie School in Strang, OK. While growing up,... View Obituary & Service Information

The family of Josh Lee Parks created this Life Tributes page to make it easy to share your memories.

Send flowers to the Parks family.