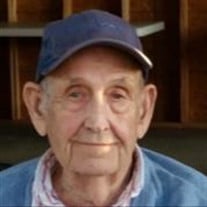 Joseph Daniel Mabry, Sr. peacefully passed away on April 29th. He was born on April 9, 1928 to Eric Emory Mabry and Florence Richards Mabry in Fanshawe, Oklahoma. He attended school through the 8th grade. In his late teenage years, he moved to Bartlesville and was employed with the Bartlesville Fire Department. Bartlesville is where he met the love of his life, Barbara Jean Hutchinson Mabry. They were married September 3, 1950, at First Assembly of God, at Frank Phillips and Virginia. When they were asked when their anniversary was, it was always a joke as to whether it was September 3rd or September 4th. They were married for 64 years prior to Barbara’s passing in 2015. He entered the Air Force in 1952 through 1956. He received his GED while in the Air Force. He and Barbara were last stationed in Alexandria, Louisiana. They were very active in the Assembly of God Church in Alexandria, mentoring the college and career age adults. They made some life-friends while there. Upon their return to Bartlesville, he regained his employment with the Bartlesville Fire Department. After a short time with the fire department, Homer Baker (our mother’s uncle) told dad about a job at Phillips Petroleum Company in the Transportation Center. He gained employment with Phillips Petroleum Company in 1957 as a limo driver and worked until his retirement in 1986. He was known as “the limo driver that wears the chauffeur’s hat”. Before his retirement, he was awarded the Million Mile Safe Driving Award. Joe loved to fish. Each summer on vacation, the first week of the family four-week vacation was spent at Hulah Lake, around the first week of August. He was serious about his fishing and his goal that week was to fill his freezer with as many fish as possible. Upon his retirement, he and his brother Eugene would spend many days camping at Hulah Lake setting out trout lines and doing some rod and reel fishing. Not only did he love to fish, but he loved to garden. He was a great gardener and grew everything, except flowers. He would say, if it wasn’t something you could eat, then he didn’t waste his time growing it. He not only had one garden, but often gardened two or three gardens each summer. Many evenings were spent as a family, harvesting all the vegetables. After the harvest, many evenings were spent as a family canning and freezing all the vegetables. He was known to have some of the best tomatoes in Bartlesville. He was an active member at First Assembly of God, now Spirit Church until his health starting failing. He and Barbara hosted an “Over 50’s” group at church for more than 30 years, which would probably be considered one of the first small groups before small groups were a thing. Some of those members also would meet faithfully on Monday’s and Thursdays at McDonalds, which was probably considered the second small group. He was proceeded in death by his parents, wife Barbara, son Joseph Daniel Mabry, Jr. (Danny), grandson Bryce Mabry, great grandson Kade Minor and his seven siblings, Elmer, Alvin, Mary, Katherine, Floyd, James and Eugene. He is survived by his sons Steve (Reba) Mabry of Harrisburg, Arkansas and Calvin Mabry of Bartlesville, his daughter Brenda (Bill) Minor of Bartlesville. Grandchildren Curtis Thomas, Shawn (Sandy) Thomas, Chris (Nicky) Mabry, Jenny (Chad) Allen, DaLyn (Jody) Sutton, Dustin (Kristie) Minor, and Zackery Minor. Great Grandchildren Tanner Thomas, Cayenne Chinn, Abby Snelson, Peyton Thomas, Krystan Brooks, Christa Mabry, Lane Davis, Hollyn Allen, Hunter Cottingham, Cameron Sutton, Harper Minor. Plus, many extended family. Services will be held Tuesday, May 3rd at 2:00 p.m. at Spirit Church with Pastor Darryl Wootton, Pastor Jason Fullerton and Pastor Gary Davidson officiating. Interment will follow at Memorial Park Cemetery, under the direction of Stumpff Funeral Home. Joe’s family would like to thank the staff and nurses at Bartlesville Health and Rehab for their care over the last seven years. We are not sure you will find a better hall monitor than you’ve had the last seven years. Also, we would like to thank Comforting Hands Hospice for their care over the last nine months.

Joseph Daniel Mabry, Sr. peacefully passed away on April 29th. He was born on April 9, 1928 to Eric Emory Mabry and Florence Richards Mabry in Fanshawe, Oklahoma. He attended school through the 8th grade. In his late teenage years, he moved... View Obituary & Service Information

The family of Joseph D. Mabry created this Life Tributes page to make it easy to share your memories.

Send flowers to the Mabry family.