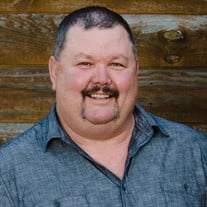 Joseph “Joe Bob” Robert Kelley, 55, of Barnsdall, Oklahoma, died Sunday, August 15, 2021, in Tulsa, Oklahoma. Joe Bob was born February 28, 1966, in Bartlesville, Oklahoma, to parents Jerry Leon Kelley and Dorothy Elizabeth (Irwin) Aultz. He graduated from Barnsdall High School and the School of Hard Knocks. He married Lara Clements on November 11, 2005. The couple enjoyed many good years and laughs together. Joe Bob was a successful business owner of JBK Well Service, for over twenty years, in Barnsdall. He was an all-around good guy and was always willing to give you the white t-shirt off of his back or really anything else he had that someone needed. He enjoyed watching westerns, hunting, playing with the grandkids and taking a good nap! He also enjoyed Cavalcade in Pawhuska, in fact, he and Rick Perrier hold the Wild Cow Milking record. Joe Bob was preceded in death by his father; grandmother Wauneta Wells; grandfather Harley Kelley and maternal grandparents Pearl and James Irwin. He is survived and loved by his wife, Lara, of the home; daughter Casey Kelley and her two daughters, Addisyn and Payton; daughter Tiffany Kelley; son Jerry Kelley; daughter Brittanie White and husband Will and their son Nathan White; daughter Kaycie Hall and husband Chad and their daughter Ellie Porter and son Tyler Dahl, all of Barnsdall; one brother Carl Kelley and wife Suzie and their three children and his mother, Dorothy, also of Barnsdall. Come and go visitation will be held on Saturday and Sunday from 10am to 8pm at the Barnsdall Stumpff Funeral Home. Funeral services will then take place on Monday, August 23 at 10am at the Barnsdall First Baptist Church with interment to follow at the Ethel Reece Cemetery. In lieu of flowers, the family suggests making donations to either the Barnsdall FFA program c/o American Heritage Bank 400 West Main Street in Barnsdall, Oklahoma 74002 or to Cavalcade P.O. Box 487 in Pawhuska, Oklahoma 74056, as both of these were very close to his heart.

The family of Joseph "Joe Bob" Kelley created this Life Tributes page to make it easy to share your memories.

Send flowers to the Kelley family.