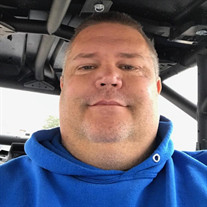 Joseph “Ben” Benjamin Hudson, 46, of Wann, Oklahoma, passed away Monday, December 21, 2020 in Bartlesville, Oklahoma. Ben was born December 2, 1974, in Gibson City, Illinois, to parents Robert Lloyd Cline Jr. and Ruth Anne (Kincade) Littleton. He graduated from Dewey High School in 1994. He worked for Bellco, OPS, Superior and HS Field Services. His true love for vehicles eventually lead him to start his own business as a mechanic at Ben’s Auto Shop. He married Lisa Deanna Miles on September 15, 2018. The couple loved hosting parties together and there was never a big enough bonfire for the two. Ben was the ultimate man in all aspects- strong, gentle, kind, generous, funny, honest and the list goes on and on. If you ever had the chance to cross paths with him, you knew it. If Ben was not working on a vehicle, he was outdoors. He loved being outside and his toys were known to almost everybody he knew. Cookouts, bonfires, and beer meant a good time with the people he loved the most. He always said there was nothing better than a campfire hotdog! Ben was preceded in death by his dad Robert Lloyd Cline, Jr and stepdaughter Candice Jo Tarkington. He is survived by his wife, Lisa, of the home, and son Ryan, his mother Ruth Anne Littleton of Owasso, Oklahoma, Brother David Hudson and wife Tammy of Grove, Oklahoma; Brother Richard Hudson and wife Christina of Hannibal, Missouri; Sister Roxanne Butts and husband DeWayne of Tulsa, Oklahoma; Sister Billie Jo Wilken and husband Andy of Paris, Illinois; Stepsisters Connie and Robin of Illinois along with a multitude of nephews, nieces, great nephews, and great nieces. A celebration of Ben’s life will be held at a later date. Cremation has been entrusted to Stumpff Funeral Home and Crematory. In lieu of flowers, contributions to help with unforeseen medical and funeral costs may be made to https://www.gofundme.com/f/bens-medical-and-financial-fund?utm_medium=social&utm_source=facebook&utm_campaign=p_na%20share-sheet&rcid=c290893b081d476480aa0a84f031cf36&fbclid=IwAR2MgXz8gPy85yF3OXFP8X9QD_pcnT71-FA-oJygXfHaiSx8kbI22kC9jd8

The family of Joseph "Ben" Benjamin Hudson created this Life Tributes page to make it easy to share your memories.

Send flowers to the Hudson family.