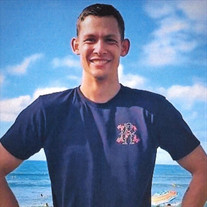 SSGT Joseph Ryan Braig was born on August 14, 1991 in Douglas, WY. On the early morning of June 5, 2021 Joseph was in a tragic vehicle accident off post in Pacific Grove, CA. Joseph Braig attended his general studies in Colorado, Wyoming, and Oklahoma. In 2009 Joseph graduated High School in Nowata, Ok and went on to study at Oklahoma University. Soon after he made the decision to join the United States Army and enroll as a 35P Cryptologic Linguist in which he would go on to learn the Korean language. He had the privilege of being stationed at Ft Hood in Texas, Camp Humphrey’s in Korea, Schofield Barracks in Hawaii, and lastly the Defense Language Institute Center in Presidio of Monterey, CA as an Instructor. Throughout his military career SSGT Braig excelled at every task thrown his way and made sure he touched everyone he ever met. He was a great leader and helped many excel within the ranks and lead better lives. SSGT Joseph Braig was not only an honorable soldier, he was also a loving son, goofy brother, wonderful uncle, and a devoted father to Olivia Emery Braig who was born February 6, 2015. His entire world revolved around his family, friends, and mostly his Daughter, Olivia E. Braig. (Livvie Bear) was Joseph’s greatest accomplishment in his short time here on Earth and the love Joseph had for Olivia knew no bounds. Olivia loves her daddy just as much and as tragic as it is to lose him, he will live on through her so the world better be ready. When SSGT Braig was not being a dutiful soldier and Instructor to his fellow men and women of the military branches, you could catch him playing videos games, riding his bike Megatron with his friends and Motorcycle Club the Street Punishers, hanging with friends, or looking up inappropriate memes he would share with everyone. Joseph spent his childhood in Oklahoma hanging out with his Weekend Warriors and their families who in return became his own. Joseph had a heart of gold and would always hold out a helping hand to anyone in need. He was humble, humorous, and sometimes serious, but he always got the job done. Joseph was also a great listener and he was respected anywhere he went and we can all agree that he truly was the best part of each of us. SSGT Joseph R. Braig is survived by Daughter Olivia E Braig, Mother Luann K. Smith, Sisters Kristen L. Braig and Breana L. Bass, Grandparents Sanghi and Bertrand Smith, Nephews Damon T. Bass and Dylan J. Bass, and Uncles Lance A. Braig and sons and Lon K. Braig. Proceeded in death by Niece Lileigh A. Kellenaers, Grandfather Ronald J. Braig, and Grandmother Linda A. Braig.

SSGT Joseph Ryan Braig was born on August 14, 1991 in Douglas, WY. On the early morning of June 5, 2021 Joseph was in a tragic vehicle accident off post in Pacific Grove, CA. Joseph Braig attended his general studies in Colorado, Wyoming,... View Obituary & Service Information

The family of Joseph Ryan Braig created this Life Tributes page to make it easy to share your memories.

Send flowers to the Braig family.