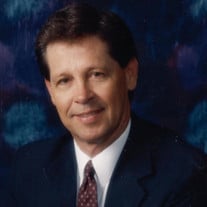 Dr. John Dean Thompson 78, of Bartlesville OK passed away Wednesday Sept 1st, 2021, at Jane Phillips Medical Center in Bartlesville Ok. John was born December 9th, 1942, in Coffeyville KS. John grew up and spent all of his younger years in Coffeyville, KS. He enjoyed roller skating at the family roller dome and in 1952 became National Champion Speed Skater in Denver, Colorado. Another hobby he enjoyed was playing the organ at school plays, fashion shows, little league baseball games, and weddings. He attended Field Kindley High School and then Coffeyville Community College graduating in 1962. In 1963, John entered Dental School in St. Louis Missouri and spent 1 year there then decided to become a podiatrist and attended the Illinois College of Podiatric Medicine in Chicago Illinois for 4yrs. He graduated in 1968 as a member of the Durlacher Honor Society. In the summer of 1967, he was chosen to an internship at the Nebraska State hospital in Norfolk, Nebraska. In 1968 to 1969 he completed internship at Hopedale Medical Complex in Hopedale, Illinois. He returned home to Coffeyville in 1969 to begin his own practice. He was on staff with Coffeyville Regional Medical Center for 35 years performing foot surgeries. John was very involved in different churches through the years, serving as a Prayer Director, Deacon, and teacher of many classes. He was very grounded in the word of God. He met Martha Ardene Price of Independence KS and was married on May 20th, 1972. They made their home in Coffeyville before Dr. John retired and then made their home in Bartlesville Ok. Survivors include his wife Ardene of the home, sons Brent & wife Kelly Thompson of Derby Kansas, Alan & wife Kara Thompson of Parsons KS, grandchildren Brylie, Kerrigan, Gavin, & Macy Thompson. He is preceded in death by his parents Don & Freda Thompson, brother Dr. Terry Thompson, and grandson Cade Thompson. Visitation will be held on Saturday from 9am to 5pm and Tuesday from 9 am to 1pm. Graveside services will be held on Tuesday, Sept. 7 at 2pm at Memorial Park Cemetery. A charitable contribution in memory of John can be made to an organization of your choice.

The family of Dr. Johnny Dean Thompson created this Life Tributes page to make it easy to share your memories.

Send flowers to the Thompson family.