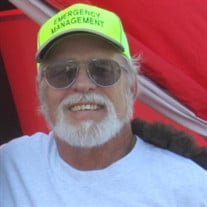 Johnny Earl Rentfro, age 70, of Bartlesville, Oklahoma, died January 29, 2021 in Bartlesville, Oklahoma. He was born to Edna Faye Wells and Roy Earl Rentfro on August 22, 1950 in Pittsburg, Kansas. Johnny graduated from Washington High School in Kansas City, Kansas in 1968. He went to work for Phillips 66 in 1968 and retired in 2010 after 42 years as a Programmer and IT Tech. Johnny Married Ruth Ann Rentfro on May 23, 1970. Johnny received several awards and accolades in the ham radio and Emergency Management community. He loved serving with Kary Cox and the EOC. Johnny was an active member of the Ham community and helped with “Ham Rescue” to help people out with radio or Tower problems. He is preceded in death by his Mother, Edna Faye Wells, Father, Roy Earl Rentfro and Brother Rick. Johnny is survived by his Wife, Ruth, Two Brothers, Jeff, and Danny, two Sisters, Sue and Florence, Son, Michael, and daughter-in-law, Tonya as well as five Grandkids with our Great Grandchild coming soon. Also, several nieces and nephews In lieu of flowers, the family suggests making donations in Johnny's name to the American Heart Association.

The family of Johnny Earl Rentfro created this Life Tributes page to make it easy to share your memories.

Send flowers to the Rentfro family.