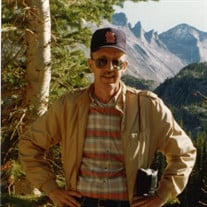 Graveside services for Mr. Watters have been re-scheduled for 3 P.M. on Friday, March 19, 2021 at the Nowata Memorial Park Cemetery. Johnnie Lee Watters, 82 of Bartlesville (originally of Nowata), died on Thursday, January 14, 2021. Johnnie was born on May 22, 1938 in Nowata, Oklahoma to Cecil Edgar and Wilma Ruth (Mattix) Watters (both of whom preceded him in death). He grew up and received his education in Nowata and graduated from Nowata High School in 1956. He received an Associate in Arts Degree from Northeastern A&M Junior College in 1958. Following graduation, he worked at Lee Hendrix Engineering in Tulsa, performing mapping and civil drafting. In 1962, he was married to Mary “Diann” Hamilton (deceased) also of Nowata, Oklahoma. He served in the United States Army from 1962 – 1963 as a Cartographer and Cartography Section leader. Following his Honorable Discharge in 1963 he served in the Army Reserve until 1967. He was employed with Phillips Petroleum Company in Corporate Engineering as a Construction Engineering Analyst. He retired from Phillips in 1996 with over 35 years of service. He volunteered countless hours in his community as a basketball and baseball coach and he refereed baseball, basketball and softball (even throwing his own daughter out of the game because she was complaining about how he called balls and strikes). He also loved being a sports broadcaster for the local radio station. He was elected to the Nowata School Board and after his retirement from Phillips Petroleum Company he volunteered as a teacher’s aid at the Nowata Public School system. Survivors include one daughter, Teri Lee Turner and her husband, John Andrew Turner of Friendswood, Texas and one sister Joyce Elaine Roberts of Nowata. Two grandchildren and one great grandchild, Christopher Michael Turner of San Marcos, Texas and Scott Austin Turner and his significant other, Jaime Rodriquez along with their daughter, Juniper Lee Turner of New Braunfels, Texas. Two nephews, Todd Watters and Rush Roberts along with their families. He also had one brother, Jimmie, “Jim” Allen Watters, who preceded him in death. In addition, he had numerous friends and neighbors who he cared about deeply. Johnnie lived life with vigor and he was passionate about sports. He played slow pitch softball (first base) throughout his adult life and had many trophies that his team earned. He loved to watch the University of Oklahoma football and basketball (when they were winning) and he was able to attend many collegiate games during his lifetime. He would always say the highlight of all these games was sitting on the 50-yard line watching OU beat Texas. He loved to watch professional baseball and if he wasn’t wearing his OU baseball cap, he was wearing his St. Louis Cardinals one. He was an avid walker, stating he had virtually walked enough miles to circle the globe a couple of times. His favorite places to visit were national parks; hiking and taking pictures. He kept up with his high school classmates and reunions were always a time of great joy. He enjoyed life, loved his family and friends and will be missed dearly. In lieu of flowers, donations may be made in memory of Johnnie Watters to Nowata Public Schools, 707 W Osage Avenue, Nowata, OK 74048.

The family of Johnnie Lee Watters created this Life Tributes page to make it easy to share your memories.

Graveside services for Mr. Watters have been re-scheduled for...

Send flowers to the Watters family.