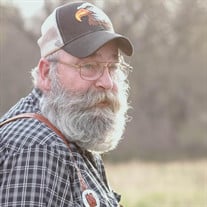 John Jacob Young, 59, left this world on April 16, 2020. John was born May 2, 1960, to Jane Louise (Mathis) Young and Ralph T. Young in Marshalltown, IA. He graduated from Marshalltown High School. After high school, John went on to try his hand at becoming an electrician, but his talents led him to become a journeyman Ironworker for Local 67 in Des Moines, IA. While working the red iron it allowed John to travel the world. In 1983 he worked for Atlas Tower in Vinita, OK constructing telecommunication towers; where he met his wife, Darlene Myers. John and Darlene were married April 7, 1984, they traveled for nearly a year for John’s work and shared many adventures. In 1986 John began his career in the Bingo Industry where he traveled making many friends until 2007 when he decided to work locally. In 2009 John became the owner of McFerron Quality Meats until 2019. John was a member of the Fraternal Order of Eagles Aerie 610 and the Bartlesville Masonic Lodge. John Young never met a stranger! He enjoyed visiting with all his friends and working on projects. He believed and lived his life with the mantra of treating others as you would like to be treated. John was a cherished man, a faithful and loving husband, dad, friend, brother, and son. Memories will allow John to live on through many. He was truly one-of-a-kind. John was preceded in death by his parents, and brother-in-law, Greg Curtis. John is survived by his wife, Darlene; two daughters, Jennifer Young and loving partner Mike Bruns and Francis and husband Joel Hentz of Nowata, OK; five grandchildren, Christopher and Emma Ludemann of Fort Pierre, SD, Donovan, LoraLei and Ben of Nowata, OK; one great-grandchild, Evan of SD; brother, Ralph T. Young Jr (Buzz), wife Sue and nephew Taylor Young of Urbandale, IA; one sister, Mary Jane Curtis of Marshalltown, IA; and niece Lisa Boettcher, Crystal Lake, IL as well as many cousins and dear friends. Come and go visitation will be held on Tuesday, April 21, 2020, from 9:00 am – 3:30 pm with family receiving guests from 4:00 pm-7:00 pm. Graveside service will be at 2:00 pm, Wednesday, April 22, 2020, at Peoria Indian Cemetery in Quapaw, OK. In lieu of flowers, the family is asking those who would like to donate to a memorial for the Young family may do so by addressing to Darlene Young in care of Stumpff Funeral Home, 620 E. Cherokee Avenue, Nowata, OK 74048.

John Jacob Young, 59, left this world on April 16, 2020. John was born May 2, 1960, to Jane Louise (Mathis) Young and Ralph T. Young in Marshalltown, IA. He graduated from Marshalltown High School. After high school, John went on to try his... View Obituary & Service Information

The family of Mr. John Jacob Young created this Life Tributes page to make it easy to share your memories.

Send flowers to the Young family.