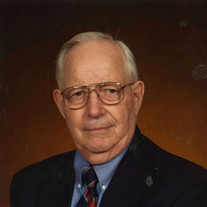 John Gordan Sawyer, 92, of Bartlesville, Oklahoma, passed away peacefully on June 1, 2022. He was born in and raised in Boone, Iowa, on June 23, 1923, to Maurees K. and Vivian (Scott) Sawyer. He attended Bedford high school, where he graduated in 1947, and was employed by Taylor County Engineer as surveyor in 1947 to 1948, then employed by the U.S. Department of Agriculture – Soil Conservation 1948 through 1950. John then serviced in the U.S. military from November 1950 to November 1952. Upon returning to Iowa, he returned to the Department of Agriculture until June of 1952, and he attended Iowa State University, to study Civil engineering. He later graduated from Iowa State College in July of 1957 earning a bachelor’s degree in Civil Engineering. He then accepted a position with Phillips Petroleum Company, as an engineer. His first assignment was with the Land Survey section in Houston, Texas and he later transferred to Bartlesville and joined the structural design section of the engineering department. On June 4, 1960, he married his sweetheart, Georgalee. His primary duties with the design division were in marine engineering and was later assigned to the team to design the facilities for the Alaskan pipeline. He served as project engineer where he for the design of the crude loading facilities at Valdez, Alaska. In 1972, John was transferred by Phillips to London, England, to serve as design representative for the design of the port facilities in Middlesborough, England, to export the crude from their North Sea operations. Later, he was transferred to Middlesborough to follow the construction of the loading facilities. He transferred back to Bartlesville in 1979, and rejoined the Engineering Department, where he served as supervisor in several areas before retiring in March fo 1988. He will be dearly missed and always remembered. John was predeceased by His Father and mother, Maurees K. Sawyer, and Vivian (Scott) Sawyer, brothers; Bill and Charles Sawyer, sisters; Elise Tranbarger and Kay Dinsmoore. John is survived by his sweet wife, Georgalee Sawyer, brothers; Dr. Robert N. Sawyer and wife Katherine, Tom Sawyer and his wife Claire, and his sister, Sondra Parman (Lowell). A funeral service will be held in the Stumpff Funeral Home Chapel on Monday, June 6, 2022, at 10:00 AM, with graveside service at Memorial Cemetery in Bartlesville, Oklahoma. Donation can be made to the minister, singers and to the American Legion, in John’s honor as an alternative to flowers.

John Gordan Sawyer, 92, of Bartlesville, Oklahoma, passed away peacefully on June 1, 2022. He was born in and raised in Boone, Iowa, on June 23, 1923, to Maurees K. and Vivian (Scott) Sawyer. He attended Bedford high school, where he graduated... View Obituary & Service Information

The family of John Gordon Sawyer created this Life Tributes page to make it easy to share your memories.

Send flowers to the Sawyer family.