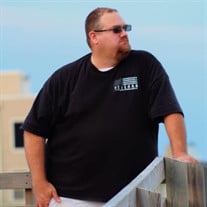 John Garland Repp passed away Friday, September 3, 2021, in Tulsa, Oklahoma at the young age of 46. John was born to Allen Ray Repp and Linda Kaye Russell Repp on November 29, 1974, in Lufkin, Texas. John graduated from Lufkin High School and later went on to study criminal law. He served in the United States Marine Corps, and then spent the rest of his working years as a truck driver, earning the Million Miler Accident-Free award. In John’s free time, he enjoyed gunsmithing and collecting, fishing, and he loved spending time with his fur-babies. On November 20, 2009, John married the love of his life, Misty Dawn Gray Repp. John is preceded in death by his parents, Allen and Linda Repp, his grandfather Gordon Russell and his grandmother Cle Russell, his grandfather Allen Ben Repp and his grandmother Georgia Repp, and by his son. He is survived by his wife Misty Repp, daughter Sue Steele and husband Dalton of Minot, North Dakota, stepson Colby Lee of Bartlesville, his sister Melissa Phillips and husband Danny of Beaumont, Texas, two grandchildren; Tinleigh and Everest, and other family including several nieces and nephews, his marine brothers, and a host of friends. In Lieu of flowers, the family asks that you make a charitable donation in remembrance of John to Folds of Honor at foldsofhonor.org or Wounded Warrior Project at woundedwarriorproject.org. Visitation will be held Wednesday, September 8, 2021, from 9 am until 8 pm, with the family receiving guests from 5 pm to 7 pm. A celebration of life will be held at a later date in Galveston, Texas.

The family of John Garland Repp created this Life Tributes page to make it easy to share your memories.

Send flowers to the Repp family.