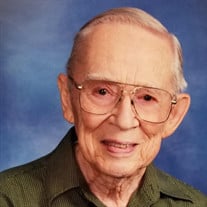 John H. "Jack" Randall, III John Herbert "Jack" Randall, age 97, longtime resident of Bartlesville, Oklahoma, passed away on December 11, 2020. The family will have a private graveside service and a memorial service will be held at a later date. John Herbert "Jack" Randall was born on October 3, 1923 in Minneapolis, Minnesota to Herbert and Helen (Melick) Randall. He grew up in Perry, Iowa and graduated from Perry High School in 1941. He then attended Iowa State College (now University) and earned his Bachelor of Science degree in Chemical Engineering in 1944. During WWII, he served in the U.S. Navy as an aviation electronics technician mate in a carrier aircraft service unit, CASU 5, based at San Diego Naval Air Station until his honorable discharge in July 1946. Jack was hired by Phillips Petroleum Company in October 1946 to work as a research engineer in R&D labs and pilot plants in Bartlesville, Oklahoma. He and the former Euela Marie Smith were married on April 3, 1948 and they initially made their home in Bartlesville. In 1950, he took a year leave-of-absence to work in his family's business in Perry, Iowa. Jack returned to Phillips in 1951, he transferred to Gasoline Department and they moved to Borger, Texas where he worked as a field process engineer in the Rice Plant. In 1956, he moved back to Bartlesville for three years in the home office and then returned to Borger as a process group supervisor in Rice Plant, Borger Fractionators and Borger Refinery. In 1965, Jack transferred to Corporate Engineering Department and they moved to Bartlesville for the rest of his career with Phillips. His work then turned to making process designs and economic studies for commercial plants and plant units to produce various hydrocarbon products for gasoline blends and chemicals. He also participated in plant startups both domestic and foreign. In 1967-68, he spent a year in Puerto Rico during construction and startup of Phillips Puerto Rico Core plant. In 1977-79, he and Euela spent 30 months in England for his work in the construction and startup of the Teesside facilities to process North Sea oil and gas. In his later years he worked in liaison with R&D to commercialize new processes for Licensing. After 38 years with Phillips, he retired July 1, 1985. Jack and Euela raised two sons, Randy and Jim, and a daughter, Judy. From his boyhood experiences as a Boy Scout, Jack led his kids into the fun of scouting, and they all enjoyed camping and traveling as a family. He served a year as Scoutmaster of Troop 15 in 1967-68. During their 12 years in Borger, Jack was active in the Wesley Methodist Church, serving in finance, stewardship, and Administrative Board. In Bartlesville, the family transferred to the First UMC and since 1976 have been members of East Cross UMC. They have always enjoyed traveling and have taken many interesting tours. The highlights of their married life included a tour of the Holy Land in 1973 and the friends they made living in England during 1977-79. He was preceded in death by his parents, and his loving wife of 70 years, Euela Randall. Jack is survived by son John "Randy" Randall of Bella Vista, Arkansas, son Jim Randall and wife Leslie of Killeen, Texas, daughter Judy and husband Tom Knobeloch of Colorado Springs, Colorado, sister Lori (Randall) Dunn of Hudson, Wisconsin, sister-in-law Eleanor Smith of Tulsa, Oklahoma, four grandchildren, Andrew Randall and wife Carrie of Lubbock, Texas, Sarah (Randall) Cain of Amarillo, Texas, Roger Knobeloch and wife Bekah of Lincoln, Nebraska, and Jill Knobeloch of Chicago, Illinois and eleven great grandchildren.

John H. "Jack" Randall, III John Herbert "Jack" Randall, age 97, longtime resident of Bartlesville, Oklahoma, passed away on December 11, 2020. The family will have a private graveside service and a memorial service will be held at a later... View Obituary & Service Information

The family of John Herbert Randall III created this Life Tributes page to make it easy to share your memories.

Send flowers to the Randall family.