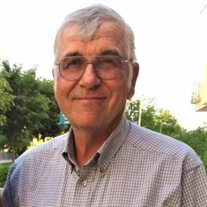 John Brian Green, 69, died early Saturday morning July 18, 2020 in Bartlesville, Oklahoma. He was born on May 13, 1951 in Pittsburgh Pennsylvania to John Richard Green and Constance (Merriam) Green. He grew up mainly in Independence, Missouri and graduated from Truman High School in 1969. He received a BA in Chemistry from the University of Kansas in 1973 and a PhD in Chemistry from the University of Missouri in 1977. Following graduation, John moved to Bartlesville and began a 39-year career in the petroleum industry. From 1977 to 1998 he was a chemist at Bartlesville Energy Technology Center, and its successors the National Institute for Petroleum and Energy Research (NIPER) and BDM/TRW Petroleum Technologies where he was involved in many projects and co-authored numerous publications. Beginning in 1998 he was employed with Phillips Petroleum, Conoco Phillips and Phillips 66 and retired as a Principal Scientist from Phillips 66 in 2016. Along the way he gained a reputation as an excellent chemist and problem troubleshooter. He met his wife Judy (Godwin) while at the University of Missouri and they married in 1980 and raised their three children in Bartlesville. John loved the outdoors and his many interests reflected that. Fishing and hunting were favorite activities and he especially enjoyed sharing them with his son Pat. He enjoyed hunting in both Oklahoma and Kansas, often with long-time friends who will miss him very much. Spending a cold morning sitting in a deer stand or a duck blind was not just hunting to him, but a time to contemplate the beauty of nature. Springtime to John meant white bass and crappie fishing and the annual family trips to Colorado for trout fishing which continued a family tradition that started when his dad was a boy. He was an avid gardener and enjoyed sharing his produce with family and friends. His 2020 garden was his best one ever. John could not be idle and was always working on a project, most notably his multi-year home remodel. He particularly liked working on projects involving his daughters Laura and Kristin. During the last 15 months of his life as he underwent treatment for stage 4 cancer, John did not change a thing about his life because he was already doing exactly what he loved: spending quality time with his family and friends and engaging in his favorite activities. John is survived by his wife Judy; children Laura Green (Kansas City, MO), Kristin Green (Moscow, ID) and John Patrick Green (Bartlesville, OK); uncle Mike Roberts; sister-in-law Linda Godwin and nieces Whitney Pasquini and Lauren Nagel; several cousins; many friends; and his two hunting dogs Truman and Dewey. He was preceded in death by his parents, sister Constance Ann Green, and stepmother Kathy Green. For anyone wishing to make donations in his name, suggested charities are American Cancer Society, Ducks Unlimited, and Red Cross. A memorial service is postponed until a later date.

The family of John Brian Green created this Life Tributes page to make it easy to share your memories.

Send flowers to the Green family.