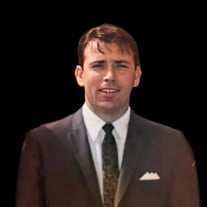 John Michael Brown September 29, 1940 - March 7, 2021 John Michael Brown of Bartlesville, OK, son of John Arthur (Art) Cranor and Flora (Cornejo) Cranor, was born September 29, 1940 in Bartlesville, OK and went to Heaven on March 7, 2021 at the age of 80. John's name was changed to Brown when he was adopted by his stepfather, Charles Brown. John excelled at sports at both College High School and Oklahoma State University. He attended OSU on a baseball scholarship. As a pitcher for his team, a hi-light was making it to the college world series in Nebraska. He studied engineering while there and was also a member of the Alpha Tau Omega fraternity. John had a wide range of interests, reflected over his career. He began as an electrician under his father, then worked as a Senior Customer Engineer at IBM, advancing to District Marketing Program Administrator in a short time and was transferred to Houston, where he continued to win awards for exceeding his goals. He built a completely custom solar home filled with his innovative ideas, including one of his patented inventions: Natures (hanging plant) Baskets. Always an inventor and researcher, John continued to experiment throughout his life and pursued other patents in photovoltaics and solar solutions. John was charismatic and fun. As a youth, he loved racing his corvette. He had a gentler side, too. While living where he was happiest-in the rural hill country of Texas- he was able to be close to nature and continue growing plants to extreme sizes for the conditions. The animals saw him as a friend, as he was the only human for miles. John is preceded in death by his parents; sister Merry Louise Brown, and his favorite uncle, Jack Cranor. Survivors include: his son John C. Smith, wife Kimberly, and their son Caton of Dallas, Texas, his daughter Stacy Ackerson, husband Kirk and their children Walker Ackerson and Tess Ackerson of Olathe, Kansas; his sister Rose Ruggieri of Urbandale, Iowa; sister Dee Cook and husband Tom of Urbandale, Iowa; brother Artie Cranor and wife Debi of Lemon Grove, California; sister Tammy Jones and husband Anthony of Ravenna, Texas and many nieces, nephews, cousins, and extended family. The family would like to thank the wonderfully caring staff at The Journey Home for their exceptional care. John's ashes will be spread privately by family, arrangements by Stumpff Funeral Home in Bartlesville. In lieu of flowers, contributions can be made to The Journey Home Hospice House in Bartlesville, Oklahoma.

The family of John Michael Brown created this Life Tributes page to make it easy to share your memories.