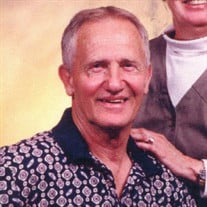 Bartlesville, Oklahoma – Joe Daniel, 86, went home to be with his Lord on Sept. 10, 2021. He was born Feb. 10, 1935, in Roswell NM, as the oldest son of Winston and Catherine “Katy” Daniel. After High School, Joe attended OU in Norman, OK. He served in the US Army and was honorably discharged in 1957. He managed his parents paint and glass store in Roswell, NM and worked for his uncle’s glass business in southern California. In 1974 he graduated with his bachelor’s degree in Recreation from Eastern New Mexico University. He was the Athletic Director at the Bartlesville YMCA from 1974-1976. He then worked for Phillips Petroleum Company from 1976-1994. He was married to his loving wife, Betty, for 51 years. He excelled in all sports he played and loved watching his kids and grandkids play sports. He had a love for music and played the steel guitar in several bands throughout his life. His favorite instrument was his 1958 Gibson electric guitar. He was preceded in death by his parents, his brother Tim, his grandson Ray and his first wife Marolyn Whorton. He is survived by his wife Betty, his sons Joe Daniel Jr. (wife Tami) of Lawton, OK, , Mark Whorton of Alamogordo, NM, Paul Whorton (wife Tricia) of Dallas, TX, Neil Lowrey of Pasadena, TX, Steven Lowrey of Dewey, OK, and his daughter Jody Shade (husband Marty) of Bartlesville, OK. He was blessed with 15 grandchildren and 2 great-grandchildren and several nieces and nephews. A service of remembrance will be held at 10 a.m. Saturday, September 18, 2021, at Highland Park Baptist Church in Bartlesville OK. The family plans to wear OU apparel/colors and encourages anyone attending to join them if they wish. Memorial services are under the direction of the Stumpff Funeral Home & Crematory. Come and go visitation for family and friends will be held on Thursday and Friday from 9 AM until 8 PM each day and the family will receive guests at the funeral home on Friday from 6 PM until 8 PM In lieu of flowers, a gift in Mr. Daniel’s memory may be made to the Highland Park Baptist Church, 300 S.E. Washington Blvd., Bartlesville, Oklahoma, 74006.

The family of Joe "Jody" Winston Daniel created this Life Tributes page to make it easy to share your memories.

Bartlesville, Oklahoma – Joe Daniel, 86, went home to be with...

Send flowers to the Daniel family.