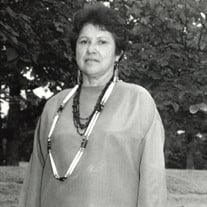 Joanne Kitchkommie began her journey on March 3rd, 2022. She was born October 3, 1941 in Topeka, KS to Agnes Wabski and Joseph Kitchkommie. Joanne attended Haskell Institute in Lawrence, KS where she met Troy Lee LittleAxe. Troy and Joanne were married in December of 1961, and were married for almost 58 years at the time of Troy’s passing in 2019. Joanne was a proud member of the Prairie Band Potawatomi Nation of Kansas. She spent many years dedicating her time and concern to the Shawnee ceremonial life that her husband and eventually her family followed. Joanne was always supportive of her husband and family’s endeavors whether it was through ceremonial life, powwows, stomp dances, academia, or sports. Troy and Joanne were heavily involved in the Kansas City Native American community during the early years of their marriage. They later relocated to Bartlesville, Oklahoma where they continued their involvement in the local community through organizations such as Operation Eagle, Bartlesville Indian Women’s Club, and Oklahoma Indian Summer. Joanne was an avid supporter of education and spent much of her life alongside her husband helping to educate Native youth in cultural knowledge. Joanne was recognized by the Oklahoma Federation of Indian Women as the 1995 Mother of the Year. Joanne was preceded in death by her husband Troy LittleAxe Sr., her parents Joseph Kitchkommie and Agnes Wabski, sisters Mary Lou Kitchkommie and Marilyn Brewer, and brothers, Joe Wabski and Michael Kitchkommie. Joanne is survived by her children Lisa (Gary) and Dennis (Quannah) of Bartlesville, and Troy Jr. (Claudia) of Miami; grandchildren Waskeh (Ashley), Nawnee (Geramey), Tre, Will, Claude, and Jamison; great-grandchildren Julisa, Monte, Elias, and Matayu; sisters Joyce Guerrero, Theresa Kitchkommie, and Laverne Hale and one brother Rick Wamego as well as numerous nephews, nieces, cherished friends, and other family. Family would like to recognize Tara Mitchell, Luis Ortiz, Molli Stumpff Flock and Brettnee Beartrack Martinez who considered Joanne a Grandma growing up. The LittleAxe family would like to extend a heartfelt thank you to our sister and auntie Lisa, for her dedication in caring for Joanne. We also thank Kindful Hospice staff Leah, Rae, and Rhonda as well as special family caretakers Steva House and Kara Eutsler. In lieu of flowers, please send donations to Operation Eagle Indian Education Association (OEIEA)of Bartlesville, or the Bartlesville Indian Women’s Club. Both of these organizations were near and dear to Joanne and in which she spent many years dedicating her time. An evening wake service will be held March 4th, 2022 at the New Hope United Indian Methodist Church. Viewing to begin at 4pm with dinner at 6:00 pm. Family services will take place at the Little Axe family estate in Little Axe, Oklahoma on March 5, 2022 with final rites and interment on Sunday, March 6 at Little Axe family cemetery.

The family of Joanne LittleAxe created this Life Tributes page to make it easy to share your memories.

Send flowers to the LittleAxe family.