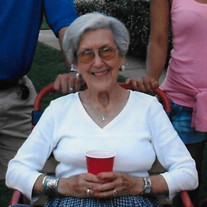 JoAn Neely Fraser was born on December 1, 1925 in Texarkana, Arkansas to Earnest “Ned” Neely and Gertrude Dildy Neely. She was reared in Muskogee, Oklahoma. After high school graduation, she worked for the government Rationing Department during World War II. During that time, she met a young military officer, Hugh Blaine Fraser, who she would marry after his return from active duty in Europe. They celebrated 74 years of marriage. JoAn and Blaine had three sons, David and his wife Debi, father of Neely (deceased) and Cole; Bob and his wife Meredith, father of Marshall, Jordan (Ihrig) and Shelby; Michael and his wife Kwan, father of Robbie, Ashley (Lewis) and Meghan. They had six great grandchildren: Jack, Harrison and Ellie Ihrig, Harper Fraser, and Hudson and Landon Lewis. They had two nieces, Dr. Jan Sweet Freeman and Susan White, and two nephews, Joe and Jim Neely. Their sons and their families were a huge source of love and happiness in her life. JoAn worked several years with Hospitality Hostess Service, welcoming newcomers to Bartlesville. Following that, she worked for Barlows as an interior designer. When her husband was transferred to Hopkinsville, Kentucky, she opened a gift and home decorating shop. After her return to Bartlesville, she partnered with her longtime friend Mardell Campbell and opened “Around the House” at Eastland Center. After ten years, they sold the shop and retired. JoAn and Blaine were charter members of Disciples Christian Church and it was a very important part of their lives. Both served as Elders for many years and they loved each and every member. A Celebration of life will be held at 2:00 pm, Thursday, October 15, 2020, at Disciples Christian Church. This service will be outdoors, so attendees are encouraged to bring lawn chairs. In lieu of flowers, the family requests memorial contributions be given to Disciples Christian Church. Cremation arrangements are under the direction of Stumpff Funeral Home and Crematory.

JoAn Neely Fraser was born on December 1, 1925 in Texarkana, Arkansas to Earnest &#8220;Ned&#8221; Neely and Gertrude Dildy Neely. She was reared in Muskogee, Oklahoma. After high school graduation, she worked for the government Rationing... View Obituary & Service Information

The family of JoAn Neely Fraser created this Life Tributes page to make it easy to share your memories.

Send flowers to the Fraser family.