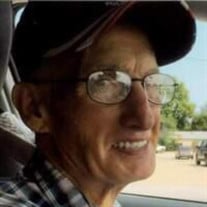 Jessie “Johnny” Johnathan Wright, age 76, of Washburn, Missouri, passed away on Saturday, February 27, 2021, at Mercy Hospital in Rogers, Arkansas. Mr. Wright, son of William Eugene and Ruby Evalyn (Webb) Wright, was born on February 18, 1945, in Kosse, Texas; he was the second of eleven children born to this union. Jessie attended several schools in Texas such as Kosse, Thorton, Groesback, Buffalo, and Bellemeade, before graduating high school with the class of 1963 in Marlin, Texas. Subsequently graduating high school Jessie enlisted in the United States Navy in June of 1963. After going through storekeeper school in San Diego, California, Jessie was stationed at USNS Sangley Point, Philippines. He then served aboard the fleet oiler USS Guadalupe A032 in the US Pacific Fleet Service Force (SERVPAC) from September 1965 to May 1967. Jessie was honorably discharged on June 5, 1967, from active duty and then transferred to active reserve. He made two WESTPAC cruises and was fully discharged in June of 1969. During his service time Jessie qualified for the National Defense Service Metal, Vietnam Service Metal and the Vietnam Campaign Metal. On October 23, 1966, he was united in marriage to Ruby Jane Ryan in Wann, Oklahoma. Jessie worked several various jobs such as working for Reda Pump Company (who was later bought out by another company) and retired in September of 2002 after thirty-five years of service; during which he was involved in various jobs such as ware houseman, shipping and receiving of oil well parts, and packing. In December of 2002, he worked as a substitute rural mail carrier with the U.S. Postal Service in Delaware and Wann, Oklahoma until his health declined in February of 2007. Jessie lived in rural Nowata and Washington Counties in Oklahoma thirty-nine years. He along with his wife Ruby fostered many children for sixteen years in Oklahoma prior to moving to Washburn, Missouri in February of 2007. Jessie was of Assemblies of God faith and attended the First Assembly of God Church in Cassville, Missouri. He was a member of the Cassville, Missouri V.F.W. Post #4205, and was a past member of the I.U. of O.E. Local 641 and the National Rural Letter Carriers Association Unions. Jessie was proud of his family and enjoyed spending time with them. He had a huge heart, loved his Lord and Savior, and helped others when needed. Jessie left a lasting impression on so many lives and will forever be missed. Survivors include his loving wife of fifty-four years, Ruby Wright, of Washburn, Missouri; three children, Calvin Wright and his wife DuWana, of Washburn, Missouri, Tonya Jackson and her husband Chris, of Springfield, Missouri, and Jerry Wright and his wife Brittany, Texas; nine grandchildren, Shania Bray and her husband Dennis Bray, of Washburn, Missouri, Paige and Lauren Jackson, of Springfield, Missouri, Aspen and Brystol Wright, of Texas, Wyatt and Tasten Wright, of Copan, Oklahoma, and Colton and Ellie Campbell, of Coffeyville, Kansas; great-granddaughters, Bryealle, Aryabella, Irylynn, and Selena, all of Washburn, Missouri; three sisters, Jerre Lee Pruett and Sharlan Gail Grinstread, both of Mexia, Texas, and Carolyn Sue Hallmark and her husband Bobby, of Porter, Texas; and several nieces and nephews, as well as past foster children. In addition to his parents, Jessie is preceded in death by three brothers, Jimmy Eugene Wright, Billy Wayne Wright, and Marcus Keith Wright; four sisters, Sharon Gwen O’Connell, Kathy Kay Kilcrease, Debbie Gay Steele, and Sandra Ann Gilmore; and one son, Patrick DeWayne Wright. A visitation will be held from 5:00 p.m. to 7:00 p.m. on Tuesday, March 2, 2021, at the White Funeral Home and Crematory in Cassville, Missouri, with words spoken by Pastor Paul Homan. Local arrangements are under the direction of the White Funeral Home and Crematory, Cassville, Missouri. Funeral services will be held on Thursday, March 4, 2021, at 11:00 a.m. at the ReNEW Church in Dewey, Oklahoma, with Pastor Eugene Hewitt officiating. Burial will follow at the Wann Cemetery in Wann, Oklahoma. Funeral arrangements in Bartlesville are under the direction of the Stumpff Funeral Home and Crematory in Bartlesville, Oklahoma.

The family of Jessie Wright created this Life Tributes page to make it easy to share your memories.

Send flowers to the Wright family.