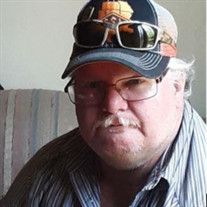 Jerry Alan Wilson Sr. went to be with his Heavenly Father on September 23, 2021 at his home with his dog Rascal by his side. He was born on January 11, 1966, in Kansas City Missouri to Gerry (Jerry) Mitchell Wilson and Martha Fern Singleton Wilson. He was called Alan from the very start as to not confuse him or his father. Jerry Alan was the oldest of the three children born to Jerry and Martha. During 1983 while living in Kansas City with his mother, sisters and aunt Alan was a Boy Scout. Alan had left school his junior year and later went on to get his GED while living in Independence Kansas with his father and then stepmother Lori. In 1987 Alan had attended classes at Coffeyville Community College to become a Game Warden. Due to family obligations Alan had to leave college in the second semester of his first year. In 1986 Alan married Rebecca June Freeman. From that union came three children: Jerry Alan Wilson Jr, Stephanie Yvonne Wilson and Joseph Singleton Wilson. After Alan and Rebecca divorced, he never remarried. Alan was a member of Get Real Ministries in Bartlesville Oklahoma and helped with starting 99 Sheep Ministries. He had a huge heart and would give anyone the shirt off his back if it would help that person. In his words, Jerry Alan was a jack of all trades and ace of none. The jobs that he liked the best always were outdoor jobs. He was an avid hunting and fishing enthusiast. It has always been said that he ate, slept and breathed hunting and fishing. He was also all about his family and had a very big heart. Jerry Alan is survived by his children Jerry Jr (AKA Jay) and husband, Kenny Wilsonbell of Bartlesville Oklahoma, Stephanie (AKA Steph) and her husband Don Busby of Pittsburg Kansas, Joseph (AKA Joey) and his wife Renee Wilson of Bartlesville Oklahoma. He had three grandchildren James, Anastasia and Ariel by his daughter Stephanie. His sisters Sandra Kinyanna of San Francisco California and her four sons and one daughter, Debra and her husband Michael Mohler of Bartlesville Oklahoma and their blended family of four daughters, two sons with a collective of twenty-one grandchildren and half-sister Marsha and her husband Thomas Sawyer and their three children Colton, Marie and Arthur. He was preceded in death by both his mother, father and a host of aunts, uncles, and cousins. There will be a Celebration of Life Service October 23, 2021 at Get Real Ministries located at 411 W 14th Street Bartlesville Oklahoma. There is to be a potluck dinner following the service. In lieu of flowers the family is requesting help with Jerry Alan’s final wish which was to be cremated. Donations may be made to the following: Fundraiser by RENEE WILSON : Help Pay for Cremation Please (gofundme.com)

Jerry Alan Wilson Sr. went to be with his Heavenly Father on September 23, 2021 at his home with his dog Rascal by his side. He was born on January 11, 1966, in Kansas City Missouri to Gerry (Jerry) Mitchell Wilson and Martha Fern Singleton... View Obituary & Service Information

The family of Jerry Alan Wilson Sr. created this Life Tributes page to make it easy to share your memories.

Jerry Alan Wilson Sr. went to be with his Heavenly Father on...