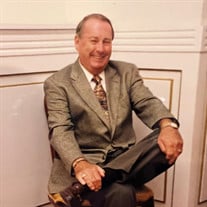 Jerry Leon Wasemiller went to be with the Lord on Sunday, February 20, 2022, surrounded by his family and beloved friends. Jerry was born on November 27, 1937, in Enid, Oklahoma. The oldest of two children, Jerry and his younger brother Neal (who Jerry always joked was adopted) were raised by their parents, Ed and Opal Wasemiller. Jerry graduated from Enid High School in 1955 and then attended Enid Business College while working at Pat’s Grocery and serving in the National Guard. Jerry was a hard-working, successful businessman who started Wasemiller Insurance in 1972 and eventually brought in his son Craig as a partner in 2007. Jerry’s contagious loving personality and his appetite for having fun made him a legend to those who truly knew him. Jerry was infamous for stories created with his “pards” on the golf course, the bowling alley, or playing cards. Jerry was loved by many but none more than his late wife Cindy who he married in 1972, his four boys Mark, Craig, Tim, and Kevin, and six grandchildren who Jerry was very proud of. Jerry was diagnosed with a number of ailments throughout his life that were supposed to slow him down, but he had other plans. Despite a well-fought battle, liver cancer eventually ended his party…but not before he threw himself a farewell party with his closest friends in his failing state. Jerry is survived by his four children, Mark Wasemiller and wife Irena Wasemiller (Seattle, WA), Craig Wasemiller and wife Marice Wasemiller (Bartlesville, OK), Tim Wasemiller and wife Kelly Wasemiller (Parker, TX), Kevin Wasemiller and wife Sarah Wasemiller (Fayetteville, AR); his brother Neal Wasemiller and sister-in-law Kari Wasemiller (Edmond, OK); sister-in-law Elaine Craig (Edmond, OK), 2 nieces (Callie Craig and Kristen Wasemiller); 3 nephews (Daniel Craig, David Wasemiller and Cole Wasemiller); 6 grandchildren (Kade, Carson, Morgan, Luke, Nash and Jay Wasemiller) and many beloved extended family members. We will celebrate the amazing life of Jerry Wasemiller on Tuesday, March 1, 2022, at 11:00 am CT at Bartlesville First Church (4715 Price Road, Bartlesville, OK 74006). In lieu of flowers, the family feels it is very appropriate for donations to be made to Adams Golf Course Junior Program where kids will be able to learn not only the fundamentals of the game Jerry loved so much, but perhaps also teach them young on various betting games while competing: Adams Golf Course Junior Program ATT: Jerry Benedict | In Memory of Jerry Wasemiller 5801 East Tuxedo Blvd Bartlesville, OK 74006

Jerry Leon Wasemiller went to be with the Lord on Sunday, February 20, 2022, surrounded by his family and beloved friends. Jerry was born on November 27, 1937, in Enid, Oklahoma. The oldest of two children, Jerry and his younger brother Neal... View Obituary & Service Information

The family of Jerry Leon Wasemiller created this Life Tributes page to make it easy to share your memories.

Jerry Leon Wasemiller went to be with the Lord on Sunday, February...

Send flowers to the Wasemiller family.