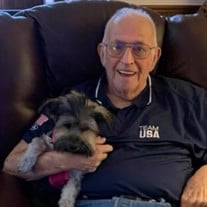 Jerry Raymond Troxell, 84, passed away on May 26, 2022. He was born to Delbert Raymond Troxell and Mildred (Stowe) Troxell on May 27, 1937, in Bartlesville, Oklahoma. Jerry graduated in 1956 from College High School. He attended N.E.O for a short time before spending two years in the army. He then went on to graduate from Tulsa Barber College and was the owner of The Palace Barbershop. During this time, he served on the State of Oklahoma Barber Board which was an appointed position by the Governor. After several years, he chose a new career path working for Reda Pump in Bartlesville. On November 12, 1960, he married the love of his life, Shirley Ann Troxell. All their married life was spent in Bartlesville where they raised their boys. He very much enjoyed coaching them in youth baseball and football. Jerry enjoyed hunting, fishing and OU football and softball. He was a proud member of City Church of Bartlesville where he loved serving on the coffee committee and as a greeter until his health began to decline. He received immense joy from spending time with family and friends. Jerry was preceded in death by his mother Mildred and father Delbert (Ray) Troxell and his mother and father-in-law, Mary Lee and Ray Wilkie. Jerry is survived by his wife, Shirley Troxell; brother Joe Troxell; son Mark (Louise) Troxell, son Tony (Tracy) Troxell; grandchildren Megan (Colby) Clark, Michael (Whitney) Troxell, Tim Troxell, Kelsey Marr, Grace Marr and his great-grandchildren Beckham and Brooks Clark. The family would like to give a special thanks to The Medicalodge of Dewey, Traditions Health & Hospice Group Tulsa and The Journey Home of Bartlesville. Visitation will be held from 9:00 AM to 5:00 PM on Saturday, May 28, 2022, at Stumpff Funeral Home Funeral services will be Tuesday, May 31, 2022, 11:00 am, at Stumpff Funeral Home Chapel with the interment to follow at Memorial Park Cemetery. In lieu of flowers the family suggests memorial donations in Jerry’s name be made to City Church Youth Building Fund or The Journey Home. If you are unable to attend, click this link for live-streaming of the funeral service. https://view.oneroomstreaming.com/authorise.php?k=1653711911186786

Jerry Raymond Troxell, 84, passed away on May 26, 2022. He was born to Delbert Raymond Troxell and Mildred (Stowe) Troxell on May 27, 1937, in Bartlesville, Oklahoma. Jerry graduated in 1956 from College High School. He attended N.E.O for... View Obituary & Service Information

The family of Jerry Raymond Troxell created this Life Tributes page to make it easy to share your memories.

Send flowers to the Troxell family.