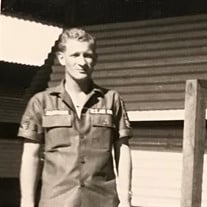 Mr. Jerry Wayne Johnson Sr., 79, of Skiatook, died at 1:47 A.M. on Sunday, August 15, 2021 at his daughter’s home. Graveside services for Mr. Johnson will be held at 10 A.M. on Thursday, August 19, 2021 at the Ethel Reece Cemetery in Barnsdall with Pastor Brett Rogers of the Harbor Church in Oologah officiating. And under the direction of the Stumpff Barnsdall Funeral Home. Visitation for family and friends will be at the Stumpff Barnsdall Funeral Home on Wednesday from 6 PM until 8 PM. Mr. Johnson was born in Bartlesville, Oklahoma on March 23, 1942 the son of John Henry Johnson and Ruby Mae (Thacker) Johnson. He grew up and received his education in Barnsdall where he graduated from Barnsdall High School in 1960. He then worked for his brother, Johnny Johnson Jr. at a service station in Pawhuska until entering the United States Air Force on April 29, 1963. He served in Viet Nam with the 38th Aerospace Rescue & Recovery Squadron and was honored with the Air Medal for his participation in the rescue of a downed pilot. He received his Honorable Discharge from the Air Force on April 28, 1969 and he attended Spartan School of Aeronautics in Tulsa where he earned his degree. He was married to Margaret Britt on June 27, 1969. They moved to Austin, Texas where he was employed briefly until returning to Oklahoma. He was employed with International Paper for a number of years as a foreman and then was employed as a letter carrier for the Broken Arrow Post Office from 1984 until his retirement in 2004. Mr. Johnson had also served in the United States Army Reserve from 1974 until receiving his Honorable Discharge/Retirement as a First Sergeant (E8) on March 23, 2002. During his time in the Army Reserve he was called to active duty during Desert Storm from December 27, 1990 until April 1, 1991. Mr. Johnson enjoyed fishing and loved Birch Lake at Barnsdall. He loved his grandchildren and his red headed hound dog, Reba. Mr. Johnson is survived by his three children, Jerry Johnson Jr and wife Terri of Nashua, New Hampshire, Traci Conley and husband Gary of Owasso and Kenneth Johnson and wife Gina of New Hartford, New York, one sister, Joan Sims and husband Dennis of Barnsdall, three grandchildren, Megan Johnson, Matthew Johnson and MacKenzie Johnson and multiple nieces and nephews. He was preceded in death by his parents, a sister, Marjorie Wood and two brothers, John H. Johnson Jr., and Jack Johnson.

The family of Jerry Wayne Johnson Sr. created this Life Tributes page to make it easy to share your memories.