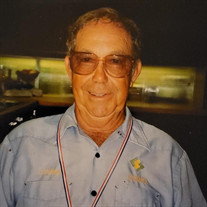 J.D. “Corkey” Scroggins Born at Maize, OK to Frank and Beulah Scroggins on July 1, 1929, he was raised at Locust Grove, OK. Served in the Army, from February 1951 to February 1953. After his discharge, he went to work for Huddleston Engineering until it was sold to Schmoldt Engineering. He worked at Schmoldt till retiring in 1990. He married Ardena Garner, on Nov 19, 1955. After eleven years of marriage, they were blessed with a bouncing baby boy they named Larry Dean. Five years later, they were graced with a daughter, Donna Faye, who is a special needs child. Corkey was an active member in the Moose Lodge, American Legion Post 105, lifetime member NRA, and the lifetime VFW. Corkey was an avid fisher and hunter. He always had a good joke or story to tell. Although he was on the road two thirds of the time, he always had time for his family and friends. Corkey and Ardena have five grandchildren and six great grandchildren. Holidays were always special times when everyone got together, one of his favorite times was during hunting season when four generations of Scroggins family, and many other close friends got together and told jokes, ate steak, drank whiskey, and told stories. Corkey was preceded in death by his parents, four sisters, one brother and one granddaughter. Was survived by his wife, Ardena, two children, Larry and Donna, five grandchildren, Sarah, Jotham, Jericho, Tiffany, Tyler and significant other Jessica. Six grandchildren, Lilly, Logan, William, Noah, Amilia, and Thurman. Once sister, Nora Lee, one bother-in-law Tommy, one sister-in-law Nancy and many nieces and nephews. He will be truly missed.

The family of Jerald "Corkey" Dean Scroggins created this Life Tributes page to make it easy to share your memories.

Born at Maize, OK to Frank and Beulah...

Send flowers to the Scroggins family.