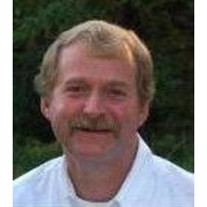 Jeffrey James Johnson passed from this life Friday, May 5, 2017, at the age of 59. Jeff was born October 24, 1957, to Paul H. & Ruth I. Johnson in Tulsa, Oklahoma. Jeff was an avid sportsman. He grew up fishing and hunting with his uncle, as well as playing football, basketball and baseball during his school years. Jeff graduated from Jenks High School in 1976, and went on to attend Oklahoma State University where he earned a bachelor's degree in Architecture with a minor in Engineering. Jeff's strong commitment to family was nurtured through many years of spending weekends with family members and extended family at his parents' cabin on Grand Lake. They grew closer as they worked together on the cabin, fished and explored the lake. During his college years Jeff developed life-long friendships and became a loyal OSU Cowboys fan. After completing his Architecture degree, he remained in Stillwater working as a carpenter. When Jeff moved back to Tulsa, he worked with several interior designers and completed remodeling jobs throughout the Tulsa area. In 1992, Jeff met his future wife, Beth Burdick, on a blind date arranged by one of his neighbors, who was Beth's cousin; and the rest is history. Jeff and Beth were married December 18, 1993 at First United Methodist Church, in Tulsa. They have remained active members at FUMC for more than 20 years and have developed many deep relationships. Jeff owned a construction company in Tulsa and specialized in custom-built homes. While Jeff was building homes, he and Beth also built a family. In 2003, they adopted Paul and Hannah from Russia. Their family was their primary focus as they created many cherished memories through the years. Jeff is survived by his wife of 23 years, Beth J. Johnson, son Paul, daughter Hannah, father Paul H. Johnson, aunt, Shirley Smith, sister, Lisa Spear, as well as numerous cousins, nieces and nephews. Jeff was preceded in death by his mother, Ruth I. Johnson. There will be a visitation, Tuesday, May 9, 2017, from 2:00pm - 7:00pm at Peters-Stumpff Funeral Home Chapel. 14206 N Cincinnati, Skiatook, Oklahoma. The family will be present from 2:00pm - 5:00pm. Jeff was never much for formality, so as we gather to celebrate his life we invite you to join us in wearing "America's Brightest Orange," your best jeans and boots. A memorial service will be held at 2:00 p.m., Wednesday, May 10, 2017, at First United Methodist Church 1115 S Boulder Ave, Tulsa, Oklahoma. A private interment will be held in Sperry, Oklahoma. In lieu of flowers, the family suggests memorial gifts in Jeff's memory to ALS Patient Services Outreach online at http://www.alspatientservices.org or by mail at APSO P.O. Box 702558, Tulsa, Oklahoma 74170-2558 or the Beacon Memorial Scholarship Fund c/o First United Methodist Church, 1115 South Boulder Avenue, Tulsa, Oklahoma 74114. Online condolences and memories can be shared at http://www.Peters-Stumpff.com/ The family thanks you for your prayers and support.

Jeffrey James Johnson passed from this life Friday, May 5, 2017, at the age of 59. Jeff was born October 24, 1957, to Paul H. & Ruth I. Johnson in Tulsa, Oklahoma. Jeff was an avid sportsman. He grew up fishing and hunting with his uncle, as... View Obituary & Service Information

The family of Jeffrey James Johnson created this Life Tributes page to make it easy to share your memories.