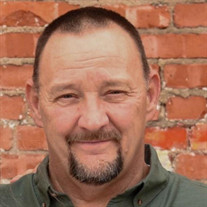 Jeffrey Dewane Gregg, 58, of Bartlesville, died Friday, March 5, 2021, in Bartlesville, Oklahoma. Jeff was born January 31, 1963, in Ponca City, Oklahoma to his birth parents, Jerald Dewane and Carol Ann Gregg. He spent his childhood years in Ponca City and Newkirk, Oklahoma. He graduated from Newkirk High School in 1981. Throughout high school, he worked for J & J Trenching, where he met Marvin and Roxie Johns and became part of the Johns family. In 1983, Jeff joined the U.S. Army and served for 3 years. Once he was discharged from the military, Jeff worked for Marco, and then Mertz. Throughout his career at Mertz, he made many lifelong relationships. To this day, he has stayed connected with these friends on a daily basis. Jeff also worked for Century Livestock Feeders and Propak Logistics. On September 14, 1991, Jeff married the love of his life, Kimberly Dawn Sattre. The couple lived in Newkirk until 1999. They then moved to Ponca City until 2003 before making their final home in Bartlesville. Jeff and Kim had a Son on July 11, 1994 by the name of Nathaniel Dewain Gregg. Two summers later, on June 12, 1996, they had a Daughter by the name of Ashley Dawn Gregg. Jeff was beyond proud of his kids and loved being the center of any activity they were involved in. He strived to offer them the best of everything. On June 22, 2014, he gained a Daughter- in- law. Nathan married Haley Shawn Mabry. Jeff loved Haley just like one of his own. Then on March 8, 2018, Emery Jo Gregg was born, and Jeff’s entire life changed. His Granddaughter was the absolute light of his life and he was the BEST Gramps EVER! He was looking forward to the arrival of his second Granddaughter, Hayden Grace in June. Jeff was preceded in death by his birth Father Jerald Gregg, Father-in-law Robert(Bob) Sattre, and Brothers Troy Johns and Gary Gregg He is survived by his Wife Kim, of the home; Son Nathaniel Gregg and Wife Haley, of Skiatook; Daughter Ashley Gregg, of Bartlesville; Granddaughter, and light of his life, Emery Jo Gregg, of Skiatook; Mom and Dad, Roxie and Marvin Johns, of Newkirk; Sister Kim (Johns) Vap and Husband Dale, of Ponca City; Sister Angela (Johns) Gee and Husband Daryle of Stillwater; Mother-in-law Lila Sattre, of Bartlesville; Sister-in-law Jennifer (Sattre) Makhanov and Husband Andrey, of Billings, Montana; Brother-in-law Jeffery Sattre and Wife Melissa, of Tulsa. He also leaves behind numerous Nieces, Nephews, Cousins, Aunts, and Uncles from both the Johns and Sattre families. In addition to family, he is survived by many close friends at Weeze’s Café and Simple Simons Pizza, where he was seen regularly. The family will receive guests on Thursday, March 11 from 6-8pm at Stumpff Funeral Home. Funeral services will be held on Friday, March 12 at 10am at Adams Boulevard Church of Christ with interment, with full military honors, at Memorial Park Cemetery. In lieu of flowers, Memorial contributions can be made to Ramona American Legion in Jeff's name

The family of Jeffrey Dewane Gregg created this Life Tributes page to make it easy to share your memories.

Send flowers to the Gregg family.