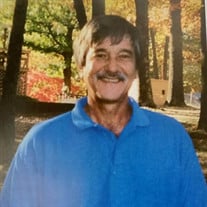 Jeffery Wood Courtney went home to be with the Lord on, April 2,2022. Jeff was born at Jane Phillips Memorial Hospital, on July 23, 1955, to Howard and Barbara Ann (Wood) Courtney. He grew up in Bartlesville and attended Bartlesville schools until the 8th grade, when he enrolled at Oklahoma Military Academy in Claremore. He was at OMA from 1969 to 1971, when the academy closed. Jeff then returned to Bartlesville and attended Sooner High School, for the 11th and 12th grades, graduating in 1973. He also attended Tulsa Junior College, where he obtained his Associate degree In Applied Science for Electronic Technology. After graduating, Jeff and Francis May opened a GOJU Karate Studio in Tulsa that was operational between 1973 – 1975. For a short time after this endeavor, he worked for Reda Pump and then ventured out to California, where he was able to work with his Uncle Don, in the special effects business for movie studios. Jeff returned to stay with his brother’s family in Oklahoma in 1979, and then started working for Aeroparts Machining Specialist as a Machinist from 1980 - 1982. He also worked for AL Williams in sales, Robinson Glass in Broken Arrow as a shop foreman, and Aquestia (A.R.I./DOROT/OCV) in Tulsa, Ok. Where he received a certificate for induction into “The Presidents Circle” in 2012 for 25 years of dedicated service, to the Radford Company (A.R.I./DOROT/OCV). During his years of employment, Jeff found time to obtain his Realtors License and worked for Abide Plus One, Inc., where he received the Realtor of the month award. Some of the things Jeff loved include motorcycles, fishing and playing golf. Jeff is preceded in death by his parents and is survived by his brother Mark his wife Becky, his sister Christine, four nephews: David, James, Brent, and Bryan, Two nieces: Erin and her husband William, Lyndsay, and her husband Nick, and two grandnephews: Mack and Kane. In lieu of flowers, please make donations in remembrance of Jeff Courtney to Tunnel to Towers Foundations. Services will be held at: Memorial Park Cemetery Tuesday April 12, 2022 2:00 PM

Jeffery Wood Courtney went home to be with the Lord on, April 2,2022. Jeff was born at Jane Phillips Memorial Hospital, on July 23, 1955, to Howard and Barbara Ann (Wood) Courtney. He grew up in Bartlesville and attended Bartlesville schools... View Obituary & Service Information

The family of Jeffrey Wood Courtney created this Life Tributes page to make it easy to share your memories.

Jeffery Wood Courtney went home to be with the Lord on, April...

Send flowers to the Courtney family.