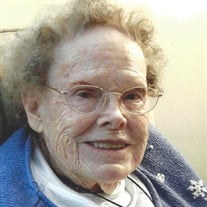 Jeanne Rowlett passed away peacefully on April 28th surrounded by family and friends at Journey Home. We want to express our deep gratitude for God’s servants Fr. Nick Phares and Fr. Lee Stephens; the gift of their love, faith, support, and care throughout Jeanne’s life is immeasurable and will forever be imprinted on our hearts. Jeanne was born on March 7,1924 in Fort Sam Houston, Texas, the first child of the late Lt. Ernest and Madeleine Elwood. As an “army brat,” she lived in many places all over the country, even Hawaii. Jeanne graduated from A & M Consolidated High School, worked at several military bases, then joined the WAVES. The active duty for the WAVES began just a few weeks before the end of WWII, and she was stationed in New York most of that time. After being discharged from the Navy as a Yeoman Second Class, Jeanne earned a bachelor's degree in Business Administration from Baylor University; the same week she graduated she married Robert Rowlett, who preceded her in death. They were married for sixty-three years. Jeanne had numerous jobs throughout her life: earning “teacher of the year” teaching typing and short-hand classes at Perry High School in Ohio (after earning a teaching certificate from Malone College and Kent State); dean of Tyler Commercial College in Texas; then a paralegal for the U. S. Attorney’s Office in Tyler, TX., retiring from that job in 1990. Jeanne was preceded in death by her brothers Ernest Anthony Elwood, Jr., and William Fitzhugh Elwood. Survivors include her four daughters and their spouses: Cindy and Jon Brandyberry, Susie and Steve Clark, Martha Rowlett and Larry Payne, Robin and Mickey Owens; Grandchildren and GreatGrandchildren: Jake and Erin Brandyberry (Luke and Haley), Jared and Katie Brandyberry (James, Layla, and Grace), Nikki and Nathan Paulson (Liz and Zach), Becky and Ryan Lanz (Emma and Colin), Robert Clark, Calvin Owens and Robin Betz, and Matty Owens. Jeanne also has one surviving brother, Rev Richard Hugh Elwood, sisters-in-law, Evelyn Rowlett and Ann Elwood, and many beloved nieces, greatnieces, nephews, and great-nephews. Jeanne had a passion for watching and talking about sports. She also was a voracious reader: newspapers, magazines, and especially romance novels. Volunteering was also a guiding force in her life. She and her husband were very active at Christ Episcopal Church in Tyler, TX., and even led the senior group, called the “Primetimers.” After moving to Bartlesville, Jeanne became a very dedicated member of St. Luke’s Episcopal Church. While in Tyler, Jeanne was a member of the Mary Tyler Chapter of the National Society of Daughters of the American Revolution, for which she worked with the Naturalization Ceremonies in the Federal Courthouse. When she moved to Bartlesville, OK., she joined that Chapter of DAR. In 2018, she was honored for her 40 years of service to the DAR. She was a founding member of the Chapter GJ, PEO Sisterhood, where she worked many years on scholarships for women; after moving to Bartlesville, she transferred her membership to PEO-DW. Jeanne was active member of NARFE Chapter 0344 in Tyler. Another special honor she received was the “Women Who Took a Chance” award in 2006 at a special ceremony in Tyler, Texas. Jeanne is also registered by NSDAR in the Women’s Memorial in Washington, D. C. under “Women in Military Service for America.” Jeanne never met a stranger; indeed, after she talked to someone for five minutes, that person already knew about her four daughters and their lives. She had many travel adventures and researched her family history with the help of niece, Donna Elwood, who also nurtured Jeanne’s love of McDonald’s food! Always ready to play a game, and more importantly win the game, Jeanne loved card games like bridge with her friends, Hearts with her daughters, and later became the “Bingo Queen” at Green Country and played “Chicken-Foot” on the weekends with her daughter Susie (who cared for Jeanne since she moved to Bartlesville) and her family. Susie’s tireless caring for Jeanne is very appreciated by everyone; Steve also gave selflessly and often to assist in Jeanne’s care. Jeanne made many friends at Green Country and enjoyed participating in the activities as her health permitted. The family extends gratitude to the caregivers that lovingly cared for Jeanne. Many thanks also to Cornerstone Hospice, and Journey Home for providing a compassionate and peaceful passage home. A memorial service to celebrate the life of Jeanne Rowlett is May 21st at 11:00 AM at St. Luke’s Church, Bartlesville. Livestreaming will be available through St. Luke’s FACEBOOK page, or Episcopalbartlesville.org. In lieu of flowers, memorial gifts may be made to St. Luke’s Episcopal Church, 210 E. 9th St, Bartlesville, Ok 74003.

The family of Jeanne Fitzhugh Rowlett created this Life Tributes page to make it easy to share your memories.

Send flowers to the Rowlett family.