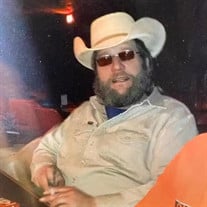 Jason Shane Nunnallee passed away peacefully in his home on Thursday, April 21, 2022, in Burbank, Oklahoma. He was forty-nine years old. Jason was born in Bartlesville, Oklahoma on October 4, 1972, to James S. (Butch) Nunnallee and Cheryl L. (Bates) Nunnellee. He graduated from Nowata High School in 1990 and became a welder by trade, but had many other talents; operating equipment, driving a truck, and performing mechanical work, Jason could fix anything if he wanted to. Jason and his brother Lance often worked together performing work while traveling around the country. Later, Jason worked for Himself, welding, operating his track hoe and mechanical work. He was a colorful character and enjoyed fast cars, showing cattle, when showing cattle his AKA was Twister from Spin City Texas. He liked running big equipment, enjoying life with the ladies and Crown Royal. His little buddy CW (Connor Wade) was his very best buddy. Jason also had a way with dogs, Niko and later Rufus were his ride or die, being in the truck everywhere it went. When he drove truck His CB Handle was Stock yard, Jason had a quick wit and funny answer for everything. Jason was preceded in death by his father Butch Nunnallee, brother Lance Nunnallee and both paternal and maternal grandparents. Jason is survived by his mother Cheryl Nunnallee, and nephew Connor Wade Nunnallee of Burbank. Along with Aunts, Uncles, and cousins. Jason could make friends with about anybody, he had a special group of guys that he considered family Scott Smith, Chad Smith, Bob Simmons and sons Cameron, Trey, Dalton, and a host of friends around the country. Visitation will be held Friday, April 29, 2022, at Nowata Stumpff Funeral Home from 4:00pm until 6:00pm and is under the direction of Nowata Stumpff Funeral Home.

Jason Shane Nunnallee passed away peacefully in his home on Thursday, April 21, 2022, in Burbank, Oklahoma. He was forty-nine years old. Jason was born in Bartlesville, Oklahoma on October 4, 1972, to James S. (Butch) Nunnallee and Cheryl L.... View Obituary & Service Information

The family of Jason Shane Nunnallee created this Life Tributes page to make it easy to share your memories.

Jason Shane Nunnallee passed away peacefully in his home on Thursday,...

Send flowers to the Nunnallee family.