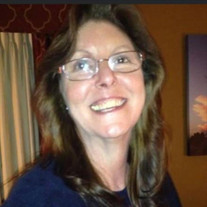 Janet Lee Lamb Greenhagen, age 61, passed away peacefully to be with the Lord on Tuesday, January 25, 2022, at Ascension St. John Phillips Medical Center in Bartlesville, OK with daughter and grandsons at bedside. She was born on July 25, 1960, in Arkansas City, KS to Lenard Edmond Lamb and Delores Gertrude Lyle. She was a 1978 graduate of Newkirk High School. She married Kenneth Lee Greenhagen, January 5, 1979, in Newkirk Oklahoma. She worked as an Analyst at Conoco for over 20 years and began working for DSR in 2011 where she was employed at time of passing. Janet was preceded in death by her parents, Lenard and Delores Lamb of Newkirk, OK, Betty “Mom” and Bill Damschen of Arkansas City, KS who raised her. She was also preceded in death by her brother Steve Womack of Arkansas City, KS. She is survived by her daughter Heather Alley of Bartlesville, OK, 3 grandkids, Brayden Irvin, Ethan Engelking and Brianna Alley. Her brother and sisters all of Arkansas City Kansas. Judy and Ted Biggs, Ladonna and Paul Grantham and Stan and Glenda Womack, as well as her stepsisters Pam Schultz and Pat Damschen, both of Hillsboro, Tx. Janet lived life to the fullest doing the things she loved. She had a way of making people laugh and smile with her quick wit and magnetic personality through her laughter she lit up many people’s lives. She was very competitive in everything she did starting at a young age where her love for sports began in high school playing basketball and cheerleading. She was an avid Oklahoma Sooners fan, in true fashion, Boomer Sooner. She loved spending time with her family and friends and her cats. She was very close with her daughter, but above all she cherished her grandkids and the closeness she had with each of them. She enjoyed everything from baking, to watching her grandkids play sports, watching her tv shows, playing candy crush and playing card games with family and her closest friends. Janet accepted the Lord as her savior and although at times strayed, she knew in her heart she was going to be with the Lord. She was very loved and will be missed dearly. In lieu of flowers, the family asks that memorial contributions are made to the family, checks can be sent to 1236 Saddle Lane, Bartlesville, OK 74006 Formal visitation will be held Saturday, January 29, from 10 a.m. until 2 p.m. at Stumpff Funeral Home and Crematory. A memorial service will be held Saturday, January 29, at 2 p.m. at the Stumpff Funeral Chapel and is under the direction of Stumpff Funeral Home and Crematory. Legacy Touch: DA2VBFRH

Janet Lee Lamb Greenhagen, age 61, passed away peacefully to be with the Lord on Tuesday, January 25, 2022, at Ascension St. John Phillips Medical Center in Bartlesville, OK with daughter and grandsons at bedside. She was born on July 25, 1960,... View Obituary & Service Information

The family of Janet Lee Greenhagen created this Life Tributes page to make it easy to share your memories.

Send flowers to the Greenhagen family.