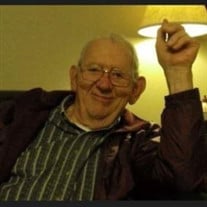 James C Wilson Sr., 91, died after complications from emergency surgery on June 17, 2022, at The Journey Home Hospice. He was born April 28, 1931, in Colorado City, TX, the son of Cullen Elmer Wilson and Mary Lucille (Bassham) Wilson. James graduated from Denver City High School, Class of 1948. He then attended Eastern New Mexico State University and Abilene Christian College where he met his wife, Ardelle Elaine Onwiler. They were married April 3, 1954, in Abilene, TX. He worked for Phillips Petroleum Company for over 30 years in Borger and Amarillo, TX and Bartlesville, OK. He was an active member of the Gateway Church of Christ (Borger, TX), the Southlawn Church of Christ (Amarillo, TX), and the Limestone Church of Christ and the Adams Boulevard Church of Christ (Bartlesville, OK). In Amarillo, he was involved in the youth program and various benevolence programs including the creation and support of High Plains Children's Home. In Bartlesville, he and Ardelle worked with the prison ministry, World Bible School and supported Hope Harbor Children's Home. In addition to his parents and his wife, he was predeceased by a grandson, Timothy Wilson, and a great-grandson, Noah Casey. James is survived by his sons: James C (Cliff) Wilson Jr. and his wife, Myrna (Monical) Wilson of Bartlesville, and David Kent Wilson and his wife, Michele (Roper) Wilson of El Campo, TX. He is also survived by five grandchildren: Nick Wilson and his wife, Sara, Marissa Wilson, Mindy Barager, Misty Wilson, and Danny Wilson and his wife, Kenzie; and seven great-grandchildren, Jakob Casey, Samuel Casey, Trace Baragar, Mallory Weeks, Reese Wilson, Brooks Wilson, Greer Wilson. Those who wish to remember James in a special way may make gifts in his name to Hope Harbor Children's Home and/or The Journey Home (Bartlesville). To view the Livestream of the service please click link below https://view.oneroomstreaming.com/authorise.php?k=1655843097191400

The family of James Clifton Wilson Sr. created this Life Tributes page to make it easy to share your memories.