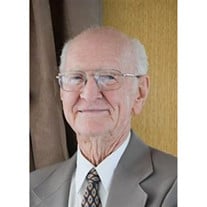 Funeral services for James Alfred Stilwell, 89, of Tulsa OK, will be held Friday, January 29, 2016 at 2:00 p.m. at the Woodland Christian Church, in Tulsa Oklahoma, with Pastor Bill Campbell officiating.             Interment in Osage Garden Cemetery in Skiatook, OK, is under the direction of Peters-Stumpff Funeral Home. Casket bearers are Eddie Reynolds, Ramiro Rangel, Eric Reynolds, Justin Rangel, Parker Rangel and Shane Hembree.  Musical selections for the service are "How Great Thou Art" and "Amazing Grace" with Jim Stilwell Jr. saxophonist.                   James passed away on January 26, 2016, at The Villages at Southern Hills in Tulsa.  He was born on November 9, 1926, in Butler, Kentucky to Charles and Mary (Lancaster) Stilwell.  He served his country in the Navy during WWII.  James married Evelyn Rose Ray on August 6, 1949; they had been married for 54 years before her passing on July 14, 2004.  He worked as a crew chief for American Airlines for 35 years; he was named Mechanic of the Year in 1978.  James had made Tulsa his home since 1947, where he was a member of the Elks Lodge, Life Senior Center Line Dancing and Tulsa Anglers Club, a member of the Trophy Gardens RV Resort in Texas and the Woodland Christian Church in Tulsa.   James is survived by his three children: Karen Reynolds and husband Eddie, Jim Stilwell Jr. and wife Barbara, Sandra Rangel and husband Ramiro, four grandsons: Brian and Auyra Reynolds, Eric Reynolds, Justin Rangel and Parker Rangel, and one great grandson Kai James Reynolds.             He was preceded in death by his parents, and wife Evelyn.

The family of James Alfred Stilwell created this Life Tributes page to make it easy to share your memories.

Send flowers to the Stilwell family.