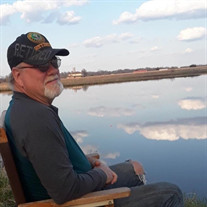 JAMES (JIM) RAY SMITH MAY 12, 1962 – MARCH 27, 2022 Sunday, March 27th, 2022, James (Jim) Ray Smith, age 59, of Nowata, Oklahoma, departed this life. He was born May 12, 1962, in Wichita, Kansas to James and Charlotte Smith. They later moved to Jane Missouri where he graduated from Anderson, Missouri while participating in the Junior ROTC program. After graduation, he left for basic training in July. He married his high school sweetheart and had 2 sons Michael and Randy. Jim remarried later in life and moved to Nowata, Oklahoma with his wife Betty who then passed away in 2013. A year later he met Paula and they spent the last 8 years together enjoying life. They built a house together, went fishing, camping, traveling, and on Harley rides. Jim was a man of many trades and could fix just about anything. Jim worked on lawnmowers, engines, carpentry, and much more. After 32 years of serving our Country in the Army and National Guard, he retired as a Master Sargent E8. Jim is preceded in death by his parents James and Charlotte, brother Robert and late wife Betty. Jim is survived by his companion Paula Lingafelter, sisters Patty and Michael Ingram, Charlene and Chris Bashaw, Pam and Donnie Blount, his two sons Michael and Allison Smith and Randy, all of Arkansas, 4 grandsons, several nieces and nephews, and a host of other friends and family. Memorial Services will be held on April 23, 2022, at 1:00 pm at the Cowboy Country Fellowship 4012 S. US-169, Talala, Oklahoma. Cremation under the direction of Stumpff Funeral Home and Crematory.

The family of Mr. James Ray Smith created this Life Tributes page to make it easy to share your memories.