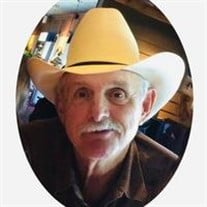 James Robert Sanders Beloved husband father grandfather uncle and friend Was born on Sunday, January 9, 1949. They say Sunday's child is full of grace, and let me tell you our dad has always been full of grace. He never met a stranger, and always lent a helping hand. He graduated from McLain High School in 1967. He joined the air national guard and reported to San Antonio after graduation. He married the love of his life, Donna Burd, June 21 right after she graduated in 1968 - that's 54 years of wedded bliss, their love for each other will always inspire us. Our dad prided himself on being a "jack of all trades" he had a successful tractor business for many years.  He volunteered as a wrestling coach at Avant for a few years, we just recently visited about how he truly enjoyed that time. He had a trucking business that brought him lots of adventures. He retired from the Tulsa fire department in February 2006 after 27 years of being a Tulsa fireman. Then he found time to buy a few Harley Davidsons and couple of Camaros and that's when the real adventures began. He and our mom have been from one side of the country to the other on that Harley, even through Mexico to Cancun. Luckily, they made it home safely each time. He has thousands of friends and a lifetime of adventure with all of them. If you were lucky enough to know our dad, I can guarantee you had fun.  Really good wholesome fun. If he were here with us today, he would invite you all over for dinner, "the more the merrier" he would always say. He truly loved all of you and wants goodness for you all. He lived a life without regret. He had a gentle heart and sees only the good in people. If he's been a part of your life, you know, he has lived his life gracefully, he always did the right thing and expected that from everyone around him. So, keep that up! Jim Bob is survived by his loving wife, Donna Sanders; his Mother-in-Law, Charlene Burd; his children and their spouses, Kevin and Kelly Sanders, Kenny and Sherry Klechka; his four beautiful granddaughters, London Klechka, Paige Sanders, Lois Klechka and Faith Sanders; his brothers, Lee and Ernestine Sanders, John Sanders; his brother-in-law Daryl and Shelley Burd; Along with several nieces and nephews he adored. He was preceded in death by his parents, Orville and Dorcas Sanders; father-in-law, Doward Burd; brother, Buddy Sanders; and nephew, Captain Justin Sanders. Visitation will be at Peters-Stumpff funeral home Wednesday March 16, 2022 from 9:00 a.m.- 5:00 p.m. with formal viewing from 5:00-7:00 p.m. Funeral services will be at The Remnant Church of Jesus Christ of Latter-Day Saints in Sperry Thursday March 17, 2022 at 10:00 a.m. Burial to follow at Hillside Cemetery. Funeral services will be under the direction of Peters-Stumpff Funeral Home. In lieu of flowers his wishes are to raise money to help his brother and sister firefighters ('tweeners) whose retirement benefits were not as advantageous as most who have retired since. The donations received will be divided between qualified living Tulsa Firefighter brothers and sisters, who retired between 1983 -1989 [('tweeners), qualifying for neither the OFPRS Escalator or Plan B retirement benefits]. This action has no affiliation with the Oklahoma Firefighters Pension and Retirement System (OFPRS) or Tulsa Firefighters IAFF Local - 176. It will be a personal donation by private funds. Link-  https://gofund.me/6ea9a809

James Robert Sanders Beloved husband father grandfather uncle and friend Was born on Sunday, January 9, 1949. They say Sunday's child is full of grace, and let me tell you our dad has always been full of grace. He never met a stranger, and always... View Obituary & Service Information

The family of James Robert Sanders created this Life Tributes page to make it easy to share your memories.

Send flowers to the Sanders family.