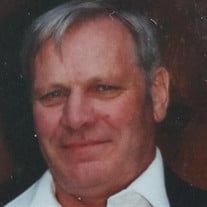 James S. Moe of Rocky Mountain, Missouri left this world on September 3, 2021. He was born July 20, 1940, in Almelund, Minnesota to Erhard A. Moe and Delphine (Greig) Moe. The family moved to Grand Marais, MN, where he attended Cook County High School, graduating in 1958. He lived in Grand Marais until 1964 and then moved to Anchorage, Alaska. He owned Domestic Appliance Service for 15 years and was also a rep for Thermo King Commercial Refrigeration. He was a Master of Repair, even inventing substitutions for parts when not available. He also worked as a hunting and fishing guide with friend, Bob Curtis. He was a member of the Masonic Order and Alaska Shrine Temple. Jim lived for making people laugh and had a joke for every occasion. He was very inventive and loved to work with his hands. He created innovations such as an engine with only 7 parts that were reviewed by Boeing. He also created a refrigerated boxcar with no moving parts which was a flash freezer, with Ben & Jerry’s Ice Cream doing a trial run with it. He was known as the “grandfather of shipping containers.” He was kind, caring, and compassionate. He was preceded in death by his parents, his grandparents John and Ingrid Moe and Sheridan and Lila Grieg, twin brother, John Moe, and sister Sharon Grandstrand. He is survived by his life partner, Jeannie Hoenike; his daughter and son-in-law, Kelli and Jeff Baumer, two grandchildren and three great-grandchildren; his daughter and son-in-law, Wendy Moe and Todd Kasteler, and four grandchildren; his sister Virginia Larson; and many nieces and nephews. He requested no service. If you have the means and wish to make a donation, please donate in his memory to the Shriners Hospitals for Children ~ www.shrinerschildrens.org.

James S. Moe of Rocky Mountain, Missouri left this world on September 3, 2021. He was born July 20, 1940, in Almelund, Minnesota to Erhard A. Moe and Delphine (Greig) Moe. The family moved to Grand Marais, MN, where he attended Cook County... View Obituary & Service Information

The family of James Sheridan Moe created this Life Tributes page to make it easy to share your memories.

Send flowers to the Moe family.