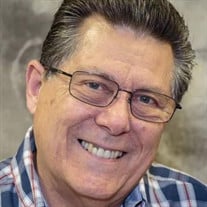 After a 15-month battle with lung cancer, James Franklin McColloch, age 76 of Bartlesville, OK, went to be with the Lord shortly after 7:00am on Friday, February 4th, 2022. Jimmy, as he was known to friends and family, was born August 9th, 1945, to Ira Ernest McColloch and Lolala Buchanan McColloch in McAlester, Oklahoma. Jim led a full and fascinating life that led him to take on many different roles throughout his life, among them being: Plumber, Mechanical Contractor, Auto Mechanic, Soldier, Apple Farmer, Singer, Songwriter, Publisher, Author, Scuba Diver, Pastor and Counselor. Shortly after marrying the love of his life he was drafted to serve in the Vietnam war where he served in the 9th Infantry Division earning the Combat Infantryman’s Badge, the Army Commendation Medal, and the rank of E-5. Not long after being drafted, Annie told him she was pregnant with their first child, and Jim was ecstatic over what would surely be his first-born son. Between picking up hitchhikers, playing his guitar and solving the world’s problems, Jim surrendered to the calling of the ministry in his 40’s and by the time he was 50 he had earned his doctorate in theology, thus taking on his new job title, “Soul Doctor.” Jim was a lot of things, but he certainly was not ambiguous. You always knew where you stood with him. It was typical for most people’s first encounters with Jim to be less than enjoyable. But it didn’t take long for him to win over hearts and the respect of those who knew him. Being a fearless man who never shied from any challenge, there was one obstacle that could take him down and leave him shaking in his boots, riding Space Mountain at Disney World Orlando. Jim was notorious for his sage advice which often came in the form of dad jokes, one-liners, and what he termed, “good humor.” Consistent words of wisdom dispensed to all children were, “You fly with the crows, you get shot with the crows.” Of Jim’s many accomplishments, traveling all 50 states without paying a single toll was one of his proudest achievements. Jokes aside, he and his family were truly honored in September 2021 when Jim was presented with the Medal of Patriotism and the Cherokee Warrior Award in appreciation of his military service. He leaves behind his sweet, little woman, Annie Ecker McColloch to whom he was married for 56 years, his two daughters (that unfortunately weren’t sons) Jana Sedgwick and Jina Rowland, two sons-in-law (that were just barely good enough for aforementioned daughters) Darryl Sedgwick and Tyler Rowland, 4 grandchildren (also referred to as quarter-Jims) Chelsea Acres, Andrew Rowland, Megan Rowland, and Erin Rowland, 1 great grandchild (that sweet baby) Rhylee Acres, his good ol’ Brother, John McColloch and his wife, Anita McColloch, and a number of nieces, nephews, extended family and friends. Jim also leaves behind two close-lifelong-brother-like friends, Jim Hodges of Wichita, and Clarence Ashlock of Skiatook. Preceded in death by his parents, Ira Ernest McColloch and Lolala Buchanan McColloch, and his brother J.B. Wright. Memorial services will be held at Eastern Heights Baptist Church, 1331 Swan Drive in Bartlesville, OK, on Saturday, February 12 at 11:00am. In lieu of flowers, donations can be made to: https://rusticflagsforveteransfoundation.org/about/

After a 15-month battle with lung cancer, James Franklin McColloch, age 76 of Bartlesville, OK, went to be with the Lord shortly after 7:00am on Friday, February 4th, 2022. Jimmy, as he was known to friends and family, was born August 9th,... View Obituary & Service Information

The family of James McColloch created this Life Tributes page to make it easy to share your memories.

After a 15-month battle with lung cancer, James Franklin McColloch,...

Send flowers to the McColloch family.