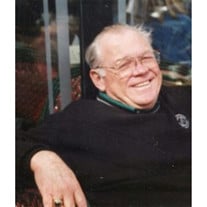 Memorial services for James "Butch" Donald Jones 77, of Skiatook OK, were held Saturday, January 2, 2016 at 1:00 p.m. at Peters-Stumpff Funeral Home in Skiatook, Oklahoma, with Pastor Susan Whitley officiating.      Cremation services were under the direction of Peters-Stumpff Funeral Home.       James passed away on December 30, 2015, at St. Johns Medical Center in Tulsa, OK.  He was born on February 7, 1938, in Oklahoma City, OK to Floyd James and Mary Frances (Braddy) Jones. He was a graduate of Tulsa Central High school and continued his education earning his masters degree. James served his country in the Army.  He married Willie Thompson on May 29, 1959 in Tulsa, Oklahoma.  They have lived in the Skiatook for 13 years.  James worked as a Sr. Executive in the insurance and financial asset management industry.  He was a quiet man, who loved his family, working, a round of golf, the beloved "Braves" baseball team and daily crossword puzzles in ink was what made him a happy man.  He was a man who believed in God but didn't go to church. A man who lived his life with respect and reverence for others.        James is survived by his wife Willie of the home, a son Jay Jones, two daughters: Dee Stewart and husband John, Mitzi Treske and husband Mike, seven grandchildren: Michelle Stewart Kubot, Matthew Stewart, William Stewart, Sarah Treske Carter, Alexandra Treske Ahearn, Andrew Treske and Suzanna Treske, four great grandchildren: Fiamma Stewart, Anna Carter, Luca Stewart and Maya Kubot, and a brother Brent "Skip" Jones.             He was preceded in death by his parents, and a sister Claudette "Jody" Blakemore.

The family of James Donald Jones created this Life Tributes page to make it easy to share your memories.