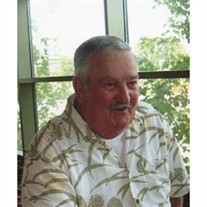 Jack Stephen Taylor Sr., 81 of Skiatook, Oklahoma passed away on January 19, 2013 at his residence. He was born June 14, 1931 to Doris Stephen and Ollie Edithlyn (Krider) Taylor east of Skiatook in his parents' home as most youngsters were back in the 30's. Greeting Jack were his siblings, oldest sister Doreen, brothers William and Bob. They greeted the last Taylor sibling, Don about 8 years later. Jack lived a bare foot, care free poor country life in the country southeast of Skiatook at the Baker place which ran a dairy later, moving north of Skiatook to the Hand-Lawson place with his parents raising corn and hogs. His love of the outdoors stayed with him throughout his entire life. He met Billie Jean Delehoyde at the movie theater, the Ritz in downtown Skiatook who became his partner and true love for 58 years. He passed on to his children, grandchildren and great grandchildren the love of the outdoors and strong work ethics. Jack graduated from the Skiatook High School in May 1950 with perfect attendance all 12 years he attended school. He was drafted by the Army in July 1952, completing basic training in Fort Leonard Wood, Missouri, transferring to Fort Belvior, Virginia until his honorable discharge, July 1954. Jack did not see time in Korea but because he scored very high on the Army tests, they kept him in the states completing mechanical classes. He joined McDonald-Douglas working on various plane engines and later moved into construction work with Peevy Construction Company retiring from there at age 55. He specialized in concrete pouring and finishing. He loved fishing, and his dog Sweet Pea. Jack followed his grandchildren in volleyball, football, softball, band, speech and dance in every state they participated in. How many young people ate snacks after every home football game in 1973, 1974 and 1975 at the Taylor house have never been counted. How many teens lived with Jack and Billie because their personal lives were upturned? Their home was always open. In his golden years, Jack and Billie traveled all over the United Sates hitting every Casino to play penny slots. He loved the Colorado area and Las Vegas, Nevada area the most. His last year and few months were kept busy with doctor appointments and enjoyment of his family. He had made a promise to his family that he would stick around an extra year since his son-in-law David was killed in October, 2011. He reminded us on that anniversary date, October 12, 2012 his year was up, he had kept his word. Jack was funny; he was kind to a fault and would do anything for anybody. This past week as his heart was slowing down for his final week with family he put it best by saying, "I have lived a charmed life. I could not ask for anything else." God Speed PaPa! See you on the other side. God Bless. He is survived by his wife Billie Jean of the home, four children: Renee Reed, Jack Taylor Jr., Dan Taylor and Rick Thomas and wife Debbie, six grandchildren: Andrea Reed Golden and husband Larry, Dawn Reed Schultz and husband Luke,; Garrett Reed and wife Megan, Lauren Reed and boyfriend Mike Priester, Jeremy Taylor and wife Michelle and Josh Taylor and wife Elizabeth, four great grandchildren: Marisa, Tulsa, Noah and Paxton, a brother Don Taylor of Grand Lake, OK; a host of nieces, nephews and many friends. He was preceded in death by his parents.

Jack Stephen Taylor Sr., 81 of Skiatook, Oklahoma passed away on January 19, 2013 at his residence. He was born June 14, 1931 to Doris Stephen and Ollie Edithlyn (Krider) Taylor east of Skiatook in his parents' home as most youngsters were back... View Obituary & Service Information

The family of Jack Stephen Taylor Sr. created this Life Tributes page to make it easy to share your memories.