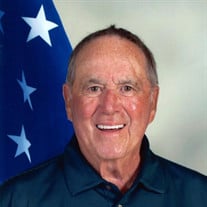 The Ballad of Jack Clapp On Thursday, December 3rd of 2020, Jack Edward Clapp finished his story and entered heaven at the age of 89. He is survived by his wife of 64 years Myrna (Hayes) Clapp of the home; His loving daughters – JoAnn Brown and husband Ralph of Arcadia, Oklahoma; and daughter Jeana Harmon and husband Mike of Dewey, Oklahoma; His sister Jewel (Judy) Upton and husband Tom of Dewey, Oklahoma; His grandchildren – Shawn and Nicole Dahl of Rawlins, Wyoming; Heath and Abigail Dahl of Sapulpa, Oklahoma; Mindy and Ryland Russell of Owasso, Oklahoma; Danna and Jim Shaw of Arcadia, Oklahoma; and Lane Harmon of San Antonio, Texas. His great grandchildren – Zoey, Paysen, Rey, Dylen, and Jack Dahl; Madaline and Ace Dahl; Isaac, Hope, and Eden Russell; and Micah Jo and Jadah Shaw; Jack leaves behind many dearly loved in-laws, nieces, nephews, friends, former co-workers, church family, and his life-long best friend, Dean “Brushy” Clark, all who have a story to share about him. Jack was preceded in death by his father, Joe Davis “Jay” Clapp, and his mother Marguerite (Kampen) Clapp-Allee. Jack was born on January 23, 1931 in Barnsdall, Oklahoma. He graduated from Barnsdall High School in 1949 and went on to attend Connors State University. He joined the united states Airforce serving from 1953-54 while stationed in Georgia. Jack married the prettiest girl in Barnsdall, Myrna Dell Hayes, on May 24, 1956. They made their home in Barnsdall, Oklahoma. The couple welcomed two daughters: JoAnn in 1957, and Jeana in 1958. The couple started their own businesses in a shared space at their home on Highway 11. The young entrepreneurs opened “Jack’s Appliances” and “Myrna’s Beauty shop and Merle Norman Studio” operating together out of their home. As their customers grew in number, they moved their business to a storefront on Kihekah Avenue in Pawhuska, Oklahoma. Jack and Myrna worked there together until their retirement in 1990 when their employee turned friend, Jody Martin continued Hometown Appliances as owner and manager. Jack was fun! He spent several years participating in rodeo events as a team roper. Over the years he and Myrna traveled across the USA and the world together. But he loved being able to come home to his quiet cowboy life with a few cattle, horses, and bird dogs at their home place on Highway 11. He and Myrna spent time on holidays and weekends at their vacation home on Grand Lake. He loved his yorkies – Mac, Murphy, and Mojo; and he will be dearly missed by his terrier mix, Putt Putt. Jack and Myrna moved to their current home in Bartlesville in 1997. Jack spent many years in service to the Lord as a member of both Barnsdall First Baptist Church and Bartlesville Southern Baptist Church. He was a volunteer at Mary Martha Outreach in Bartlesville. He enjoyed golf, card games, sports on a big screen, and visits at the coffee shop with his friends. Jack had a distant voice; he was always heard before he was seen. His hospitable personality and storytelling had a way of making all kinds of people feel at home in his presence – a stranger was always treated as a neighbor. A virtual memorial service will be streamed online on Jack’s 90th birthday, January 23, 2021 at 2pm. Jack loved a good visit and a good story and would have wanted his friends and loved ones to share this celebration. The family request that friends and family wishing to honor jack would help tell his story. Email a 2-3-minute video, or a written memory or story to [email protected] They will be shared during his memorial. A link to attend will be shared via Facebook, or by request at the email address listed above. Friends who wish may sign the online guest book and leave condolences at www.stumpff.org.

The Ballad of Jack Clapp On Thursday, December 3rd of 2020, Jack Edward Clapp finished his story and entered heaven at the age of 89. He is survived by his wife of 64 years Myrna (Hayes) Clapp of the home; His loving daughters &#8211; JoAnn... View Obituary & Service Information

The family of Jack Edward Clapp created this Life Tributes page to make it easy to share your memories.

Send flowers to the Clapp family.