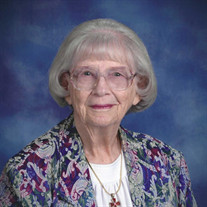 Not sure what to send?

Irene Jeannette Wolfe Cowell passed away February 19, 2022, in Valdosta, Georgia, at the age of 96. She was born to her parents, Williams J. Wolfe and Elizabeth L. Gerald on November 17, 1925, in McCook, Nebraska. She spent most of her childhood in Sheridan, Wyoming. In 1942, at the age of 16, she graduates from Sheridan High school. Soon after, she moved with her family to San Diego California. She attended college at Philips University in Enid Oklahoma for 1 year then returned to San Diego to help the war effort by working for the navy. It was in San Diego that she meets and later married her husband of 62 years, Charles Ellwood Cowell, Jr. on June 1, 1946. Irene and Chuck spent one month honeymooning across the United States as they moved from Southern California to Washington D.C. Here Irene had the opportunity to work for the Secretary of Education. Irene always said this position was one of the most rewarding she ever held. Irene and chuck moved many times throughout their years together retiring to Bartlesville, Oklahoma in 1989. Irene loved music, theater, jigsaw puzzles, and especially travel. She loved to learn about new places and cultures, and she had a special fondness for nature. When Irene was young, she loved to camp and hike in the national parks. Later, she continued to enjoy driving around looking at the animals, flowers and the rustic scenery. Another of her favorite pass times was to travel to see her four children and their families. Irene is preceded in death by her husband, Charles E. Cowell Jr. She was the last remaining family members of her generation. Irene is survived by her four children: Allan, Charlene, Randy, and Diane; and her grandchildren, great-grandchildren, and one great great-grandchild. Services will be held Wednesday, June 1, 2022, at 10am at Bartlesville First Church in Bartlesville, OK. In lieu of flowers, the family asks that memorial donations in remembrance of Irene Jeannette Cowell be sent to the National Park System. https://www.nps.gov/getinvolved/donate.htm

Irene Jeannette Wolfe Cowell passed away February 19, 2022, in Valdosta, Georgia, at the age of 96. She was born to her parents, Williams J. Wolfe and Elizabeth L. Gerald on November 17, 1925, in McCook, Nebraska. She spent most of her childhood... View Obituary & Service Information

The family of Irene Jeanette Wolfe Cowell created this Life Tributes page to make it easy to share your memories.

Send flowers in honor of Irene.