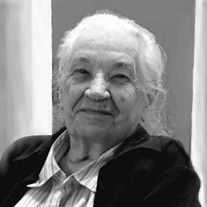 Irene Elizabeth Morrison Anderson, a 50-year Bartlesville resident passed away peacefully, Friday, September 11th, 2020 at Brookdale Senior Living South in Bartlesville at the age of 97. Irene was born on March 10, 1923 in Decaturville, Missouri, Camden County. She was the daughter of Lee Roy Morrison and Gracie May (Webb) Morrison. Irene grew up on a small farm, with her parents, seven brothers and one sister. The perspectives and habits she learned during her years between ages 6 and 16, especially, (the Depression years), together with the Christian principles taught in her home, shaped Irene for her entire lifetime. The habits of not wasting time, money, food or anything else, along with the disciplines of hard work, perseverance, planning ahead, and developing skills were principles that guided her in contributing to the family as a whole and in raising their three children. It was during her first job away from home that she met and married Andrew. While Andrew was away during the war, Irene worked three jobs and saved enough for a house down-payment, and a new set of tools for Andrew. They raised their three children together side-by-side, as fully engaged parents, in Kansas City, MO, and Bartlesville, OK. Irene was a homemaker. Taking care of and looking out for her children -teaching and training them, (which included regular church attendance), - was the most important and most valued role to her. She also ran her own day-care business, and later, was a secretary at Phillips. She always enjoyed baking, making/collecting all the needle arts - quilting, knitting, crocheting, etc., and is a life-time member of the Jubilee Quilters Guild. Irene is survived by her three children, Larry M. Anderson and his wife, Mary Lou, Janie Cooper and her husband, Dave, and Roy C. Anderson Sr. and his wife, Debra, all of Bartlesville; her brother, Marion Morrison and his wife Marjorie, of Shawnee, Kansas; eight grandchildren: Nikki King and family of Tulsa, Kristi and Chris Flenniken and family of Austin, Texas, Crystal Anderson-Barone and Jill Barone and family of Tulsa, Jason Boyle and Jenny Szabo and family of Seattle, Justin G. Boyle and Sarah Ann and family of Livingston, MT, Andy Anderson and Donn and family of Oologah, OK, Roy Anderson Jr. and family of Oglesby, OK, Katie and Cory Carter and family of Bartlesville, along with 17 great-grandchildren, as well as a host of nieces and nephews, other relatives and friends. Irene was preceded in death by her loving husband of 76 years – Andrew George Anderson; her parents; her sister; and six of her seven brothers. We would like to extend our sincere gratitude to all the staff at Brookdale Senior Living South for their attentive, compassionate, loving care for Irene and (earlier) Andrew during their lengthy stay. Funeral Services will be held on Friday, September 18, 2020 at 2:00 pm at the Stumpff Funeral Home Chapel in Bartlesville. Memorial donations in Irene’s honor can be made to the Jubilee Quilters Guild in Bartlesville. Irene's service will be live streamed and can be viewed at this link: https://www.oneroomstreaming.com/view/ Event ID: StumpffFHC Password: SCQANA

The family of Irene Elizabeth Anderson created this Life Tributes page to make it easy to share your memories.

Send flowers to the Anderson family.