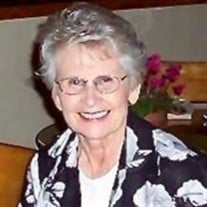 Ingalill “Lil” Leopold, 87, peacefully passed away surrounded by her loving family at her home outside of Bartlesville, OK on December 11, 2020. Lil, daughter of Åke and Gerda Winte, was born on March 5, 1933 in Sala, Sweden, the second of seven children. After receiving her education in Sweden, she and life-long friend, Gunvor, boarded a ship at the age of 20 to pursue life in the United States. Lil planned to work her way across America from New York to California, and on a fortuitous day she attended a stag dance outside of Denver, CO. At this dance, she met, fell in love with, and later married her husband, Dick Leopold. They were married for 66 years. They made their first home in Denver and welcomed their daughter, Pam, who Lil would affectionately call, Pamela Sue. Their adventure next moved them to Garden City, KS where they made many life-long friends, raised their daughter, and pursued their love of travel with many wonderful trips throughout the US and Europe. Ultimately, they settled in Bartlesville, OK to run a family business, Gibson’s Discount Center. Lil worked part-time in the family business, and she was passionate in pursuing her interests from homemaking to raising race horses. Lil’s love of entertaining, gardening, nature, and animals - especially horses - led to her labor of love, Timberlane Farm, a bucolic homestead that Lil and Dick lovingly have enjoyed for 42 years. Over the years, their love of nature shone as they harvested native pecans, rescued a variety of animals, and raised many quarter and thoroughbred race horses. One of the few women in the horse racing industry at the time, Lil was among the first women to be listed as primary owner of her horses. Timberlane Farm remains a special gathering place for family, especially her three grandchildren, and friends, including a close local group of fellow Scandinavians. Lil was known for her attention to detail. Everything she touched, she did with intention, a trait she shared with her mother, Gerda. Lil showed her love and attention to detail for her animals by fastidiously cleaning stalls. Her exceptional hospitality is renowned, especially her soup making. Those lucky enough to have been a visitor of hers, know she was exceptionally skilled at taking care of her guests. Lil’s meticulous nature is best explained by her granddaughter, who once said that Lil’s house was so clean, even her milk sparkled! She is survived by her devoted husband Dick; loving daughter Pam Breech of El Dorado, KS; grandsons Tyson and Garrett Breech of Los Angeles, CA; granddaughter Lacey Breech of Brooklyn, NY; sister-in-law Britt Winte of Pennsylvania; brother Rolf Winte and wife Lillian of North Carolina; brother Benny Winte and wife Claudia of Sweden; brother Jan Winte and wife Birgitta of Sweden; Björn Winte and wife Lena of Sweden; sister Åsa Johnson and husband Mike of Reno, NV; and numerous nieces and nephews throughout the world. She is preceded in death by her parents and brother Alf Winte. Lil chose cremation, and a private family service will be held. A memorial has been established in her name with the Washington County SPCA, and donations can be made in her name.

The family of Ingalill "Lil" Leopold created this Life Tributes page to make it easy to share your memories.

Send flowers to the Leopold family.