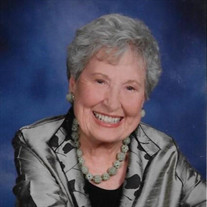 Imogene (“Gene”) Clark Crenshaw passed away on October 12, 2020, in Bartlesville, Oklahoma. She was born September 4, 1926 to Benjamin Oliver Clark and Edna May Ballenger Clark in Danville, Arkansas. Following her mother’s death in 1930, she was reared by her father and paternal grandparents, John W. Clark and Edna Earl Butterworth Clark. After completion of her high school education, Gene worked in the Office of the Secretary of Treasury in Washington, D.C. from May 1945 until October 1949. She was married to William Irvin Crenshaw, Jr. at the Foundry Methodist Church in Washington, D.C. on July 30, 1949 and in October 1949 Gene and Bill moved to Bartlesville, Oklahoma. In February 1950, she was employed as a legal secretary for Chester A. Brewer at the Law Office of Holliman and Brewer, which later became Brewer, Worten and Robinett. She worked in that capacity for 38 years and retired in September 1988. During those 38 years, she cherished the opportunity to develop friendships with people from every walk of life. In her retirement, she enjoyed traveling, gardening, long lunches with friends, playing bridge and mah jongg, and discussions at her book club. Gene is survived by her half-sister, Janet Kapraun and her husband, Dr. Phillip Kapraun, and their three sons, Matthew, Jeffrey and Mark. She was preceded in death by her husband, William Irvin Crenshaw, Jr., her mother, Edna May Ballenger Clark, her father, Benjamin Oliver Clark, her grandparents John W. Clark and Edna Earl Butterworth Clark, her half-brother J.W. Clark, and her step-mother Alice Clark. Graveside services will be conducted at Memorial Park Cemetery at 10:00 am on Saturday, October 24th, 2020.

The family of Imogene "Gene" Clark Crenshaw created this Life Tributes page to make it easy to share your memories.