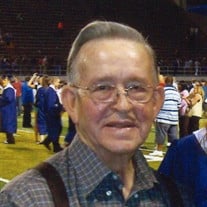 Howard Arthur Cook, beloved husband, father, and grandfather left this earth peacefully at his home on May 10, 2021, at the age of 86. He was born in White City, Ks on July 29, 1934, where he spent his entire childhood, graduated from high school in 1952, and met his loving wife Yvonne (Vonnie) Stilwell from Skiddy, Ks. Married in 1959 they recently celebrated their 62nd wedding anniversary. Howard followed his father and three uncles into the pipeline construction business as a welder building many of the major pipelines across the United States that distribute oil and gas during his career. The job required continuous travel and enabled him and his family to see many of the sights across this nation as he worked and lived in the majority of states. It was a very rewarding lifestyle truly enjoyed by him, his wife, and three children. Howard was a very loving husband and father and had much compassion for those less fortunate, never hesitating to go out of his way to help those in need. He was an incredible role model for his children and others, instilling the values of hard work, honesty, and integrity. He considered the greatest gifts in his life to be his family with special gratitude and love to his grandparents, Harry and Clara Price, who raised him and his brother. He retired in 1999 and returned to his hometown area. For the past 8 years, he was a resident of Bartlesville, where he moved to be close to his sons and grandchildren. He was preceded in death by his father and mother Henry and Mary (Price) Cook and his brother Marvin Cook. He is survived by his wife Vonnie, sons, Douglas (Laurie) Cook and Dan Cook, daughter, Kristi (Rich) Nottlemann, sister-in-law Celeste Cook, brother and sister-in-law Larry and Carol Stilwell, 9 grandchildren, 5 great-grandchildren, 3 nephews, and 1 niece. A private memorial service will be held at 1 pm on May 14, 2021, at the Stumpff Funeral Home Chapel followed by interment at the Memorial Park Cemetery. Memorial Contributions can be made to the Katy Railroad Boxcar Museum, P.O. Box 4, in care of White City, Ks 66872. Howard's service will be live-streamed and can be viewed at this link: https://view.oneroomstreaming.com/authorise.php?k=1620939845115246

Howard Arthur Cook, beloved husband, father, and grandfather left this earth peacefully at his home on May 10, 2021, at the age of 86. He was born in White City, Ks on July 29, 1934, where he spent his entire childhood, graduated from high school... View Obituary & Service Information

The family of Mr Howard Arthur Cook created this Life Tributes page to make it easy to share your memories.

Send flowers to the Cook family.