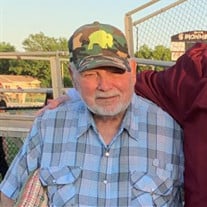 Herbert Lynn McGuire, 78, of Nowata, Oklahoma, died on Wednesday, August 19, 2020. He was born on June 24, 1942 to parents Herbert Lonzo McGuire and Sara Elizabeth Webster McGuire in Crescent, Oklahoma. Herbert married Shirley Ann Glenn on September 19, 1962. He served in the United States Air Force and worked as a machinist. During his service in the military, he received an award for his marksmanship. He enjoyed wood carpentry, Skip Bo and Wahoo. Herbert is preceded in death by his father, Herbert Lonzo McGuire, his mother, Sara Walker, his brother, Lloyd McGuire, his sister, Shirley Ann Cartwright. He is survived by his wife of 58 years, Shirley McGuire, son Timmie McGuire, daughter Belinda Pruitt, daughter Debra Culie, son Kevin McGuire, son Mark McGuire, daughter Joy McGuire and many grandchildren and great-grandchildren. A celebration of life will be held at a later date.

The family of Herbert Lynn McGuire created this Life Tributes page to make it easy to share your memories.

Send flowers to the McGuire family.