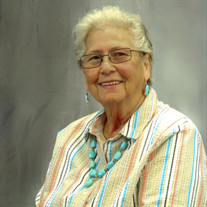 Henrietta “Rose” Carrier passed away November 5, 2021, in Dewey at the age of 84. She was born in Barnsdall, OK to William Henry & Cora Lizzie Parkhurst on May 26, 1937. Rose was the second of six children and grew up in Neodesha, Kansas. On January 22, 1954, married Joseph R. “Bob” Carrier, Sr. Her husband, Bob was a career Army person who retired in 1972 with the rank Chief Warrant Officer 2. They were stationed together in Ft. Leavenworth, KS; Stuttgart, Germany; Ft. Carson, CO; Naha, Okinow; Ft. Huachuca, AZ; and Ft. Knox, KY. After retiring from the army, they moved to Elk City, Kansas where they owned and operated the Carrier’s Market for several years. In 1976 they moved to Grove, OK where she and Bob both worked at the Shangri-La Resort, Afton, OK. When Bob developed Alzheimer’s, Rose moved to Bartlesville so that she could be nearer to the facility where he was. After his death in 1998 she met Robert “Bob” Kilpatrick who became her life partner and dearest friend until his death in 2007. They lived in Dewey, OK where she resided for the rest of her life. She was a wonderful mother, caring wife, generous and giving of all she had to anyone in need! She was also a talented seamstress & quilter, and gifted gardener. She worked as a volunteer outside the home and was a vital member of various organizations including the Dewey First Baptist Church; OSU Cooperative Extension Services in Dewey; Dewey VFW and Auxiliary Post 10099; Greenthumb Garden Club in Bartlesville; Bartlesville Indian Women’s Club and the Washington County Cherokee Association in Bartlesville. Rose is preceded in death by her parents, William and Cora Parkhurst. Her siblings, Nancy Barker, Ruthie Scammey, Maggie Berliner, and Roberta Dixon, and two grandchildren; Benjamin Carrier and Danielle Black. She is survived by brother Chester Parkhurst of Campo, CA; her children: Rosey Jackson & spouse James of Collinsville, OK; Joseph R. Carrier, Jr. & spouse Theresa of Independence, KS; Lonora “Janie” Linden & Spouse Dan of Elk City, KS; Riley Carrier & Spouse Terri of Tarpon Springs, FL and Nancy Hulse & Spouse William “Frank” of Bartlesville, OK; her grandchildren: Ted Swailes, Anne Gordon, James Carrier, Kerri Swailes, Christopher Swailes, Nickolas Love, Heather Carrier, Amber Love, Melissa Carrier, Alekzander Love, Jason Carrier, & Daniel Patitz, and numerous great-grandchildren. Visitation will be held Wednesday, November 10, at 9 AM until 8 PM at Stumpff Funeral Home and Crematory. A funeral service will be held Thursday, November 11, at 11 AM at the Dewey First Baptist Church in Dewey, Oklahoma. A graveside service will follow at 2 PM at Havana Cemetery in Havana, Kansas.

The family of Henrietta "Rose" Rosa Carrier created this Life Tributes page to make it easy to share your memories.

Send flowers to the Carrier family.