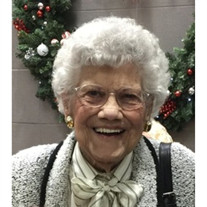 Funeral services for Hazel Glorene Kight, 94, of Sperry, OK will be held Friday August 17, 2018 at 2:00 p.m. at the First Baptist Church in Sperry, Oklahoma with Reverends Andy Anquoe and Keith Millis officiating.             Interment in Resthaven Cemetery in Sperry, Oklahoma is under the direction of Peters-Stumpff Funeral Home.  Casket bearers for the service are Rod Padgett, Brandon Padgett, Travis Tharp and Roger Phillips.  Musicians for the service are Martha Hughes and Bonnie Echerd.   Paul Kight, Courtney Padgett and Rev. Tom Branch read the eulogies.   Hazel was born on May 6, 1924, in Sallisaw, OK to Ross Taylor and Vada McCullough. She grew up in Sallisaw and was a graduate of the Class of 1942.  Hazel married Melvin M. Kight on May 27, 1942 in Sallisaw, OK; he preceded her in death on March 7, 1975. They made Sallisaw their home until moving to Bryan, TX; Henryetta, OK; Tulsa, OK and then moved to Sperry in 1974. Hazel worked as an administrative assistant in the English department at the University of Tulsa.  She enjoyed gardening, doing crossword puzzles and was an avid reader.  Hazel was a tribal member of the Cherokee Nation.  She also was a member of the First Baptist Church in Sperry where she was very active. She loved Jesus, church and family.   Hazel is survived by a daughter Sue Ellen Rogers of Tulsa; a son Paul Richard Kight of Toronto Ontario, Canada; four grandchildren: Kari Tharp and husband Travis of Midwest City, OK; Lisa Padgett and husband Rod of Broken Arrow; John Vaneron of Montgomery, AL; Kathy Phillips and husband Roger of Owasso, OK, and eight great grandchildren. She was preceded in death by her parents, husband Melvin, a daughter Wilma Jean Vaneron, two brothers: Louis Taylor and Lyndell Taylor and a sister Margie Payne.

The family of Hazel G. Kight created this Life Tributes page to make it easy to share your memories.

Funeral services for Hazel Glorene Kight, 94, of Sperry, OK will...

Send flowers to the Kight family.